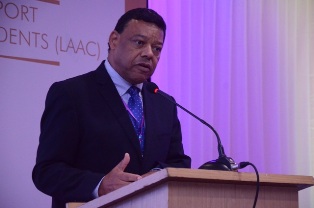 The Chief Executive Officer, African Aviation Services Limited, Mr Nick Fadugba has stated that one of the key challenges facing African Airlines is that they have weak balance sheets and are good at making frequent management changes, which adversely impacts on their long-term planning.

He said this while delivering a paper titled, “MRO Financing” at 22nd Annual Seminar of the League of Airport and Aviation Correspondents(LAAC),at Sheraton Hotel , Lagos.

Fadugba, who one of the key speakers hinted that African airlines are small and weak with aq fleet size of less than 10 aircraft and that as result they don’t benefit from economies of scale.

He added that African carriers have weak balance sheets and that the frequent management changes in the airlines adversely impacts on their long-term planning.

Other key challenges facing African airlines according to him includes limited market access , as Yamoussoukro Decision has not been fully implemented and many African airlines face difficulties accessing air transport markets in Africa and that there is foreign competition in African aviation market.

He explained that African market as constituted presently is dominated by stronger foreign airlines ,who control over 70 per cent of traffic to and from Africa, adding that  the top three African airlines combined are smaller than Emirates.

On Maintenance Repair and Overhaul (MRO) trend, Fadugba contended that most airlines today are concentrating on their core business of flying aircraft, earning revenue and maximising yields, optimising product and minimising costs.

He also opined that most airlines are looking for cost-effective solutions to address their MRO requirements / outsourcing arrangements, potentially with subsidiaries and through joint ventures, adding that the larger MROs are providing a wider range of products to cater for higher levels of outsourcing by airlines.

Speaking further, the CEO of African Aviation Services Limited stated that older aircraft are being retired, and that new technology aircraft are entering airline fleets.

He also said that high aircraft utilisation by low-cost carriers, who typically outsource their maintenance requirements.

Be the first to comment on "Weak Balance Sheet, Frequent Mgt. Changes Bane Of African Airlines—Fadugba"