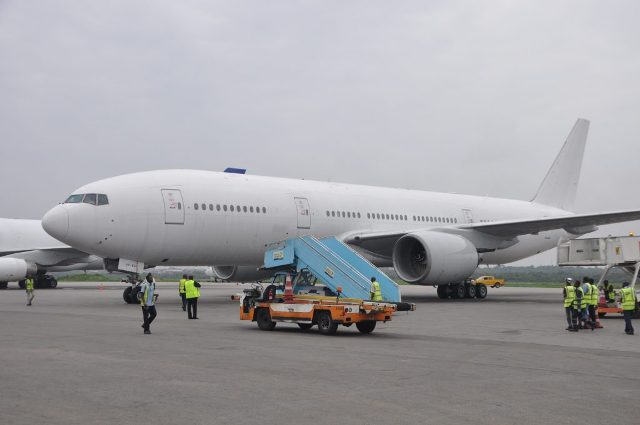 Speaking at the Hajj terminal of the Murtala Muhammed Airport(MMA) Lagos, the Chief Executive Officer of the airline, Alhaji Muneer Bankole, who led other officials including, the Lagos State Commissioner for Home Affairs and Culture, Alhaji Abdul -Hakeem Abdul-Lateef and the airline Chief Operating Officer (COO) Pastor Michael Ajigbotosho to receive the aircraft, said its delivery was a dream come true.

He added that ‘the lease-purchased aircraft was made possible after First Bank intervened in the wake of crisis some months ago’.

He noted that the aircraft would be used during the Hajj operations which commence on July 25, adding that it may then be deployed to London route afterwards, while it awaits return of the one undergoing reconfiguration soon.

According to him, “First of all we have to give thanks to God, it’s like a dream come true, I use this opportunity to thank all my colleagues that have worked tirelessly to get this dream to light. This is one of our plans; over the years, we have been leasing aircraft for hajj/ international operations which have consumed much of our foreign reserves; so, at the beginning of this year, it was one of our dreams that it will be the end of leasing for international operations. The cost is high when you lease, you invest so much money, both the capital and the equipment, and you don’t get something in return because the money goes out of the economy, so we use this opportunity to thank God and First Bank.

He continued, “And in the wake of challenges, we have to address and present it to the bank and First Bank gave us a 10 percent window which empowered us to get this airplane. This airplane is a leased-purchase aircraft from Atmax, our partner in Canada, John Biden and his colleagues took a bold step, they said a lot people are afraid to invest in Africa but he said he will work with us for a change. We are expecting two more jet Also speaking, Executive Director, Business Development of the airline, Ishaq Na’Allah, said the airline will commence airlifting pilgrims to Mecca and Medina by July 25, adding that it will airlift 10,000 people from six airports including: Lagos; Kaduna; Kano; Ilorin; Port-Harcourt and Maiduguri.

He said that the aircraft has a capacity of 323 passengers, with 28 Business Class.

Earlier, Bankole revealed that the airline will recommence its London operations by this Winter.

“We will return to London by this winter after the completion of the aircraft reconfiguration, we have got the slot already, we are reapplying and we are returning to the route”, he added.

The Medview boss however, lamented that after government announced the exemption of domestic airlines from paying Value Added Tax (VAT), the policy is yet to be implemented.

“But the VAT removal is yet to be implemented; we have heard of it but can’t feel it. We keep talking to FIRS, they keep chasing us. You see, commercial operators don’t pay VAT, taxes and charges in other countries because it makes the airlines’ operations nosedive, let’s do the right thing, I think government agencies should go and try to get money and work like service providers, we should get out of this colonial approach, when you pay five percent or 3 per cent to all agencies, we are still in colonial era, we should be transparent about the business”, he said.