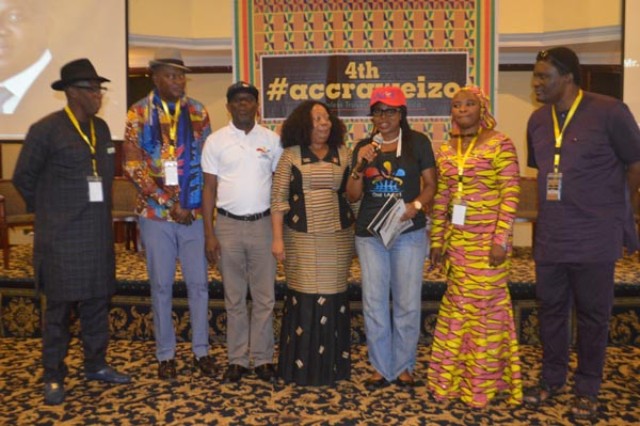 The new push to position Lagos as the Tourism hub of West Africa and the entertainment capital of Africa was put on display in Ghana.

At the event, Lagos State mounted an exhibition along with 20 other firms at the 2 day event that took place at La Palm Royal Beach Hotel.

The travel event which was attended was supported by the Ghana Tourism Authority.

Lagos was represented by Mr. Babatunde Anann and Mrs. Adanma Oni both Directors at the Ministry of Tourism Lagos.

The Lagos Tourism Video was played on the screen for most parts of the first day of the expo during breaks.

The second day of the event was dedicated to Tourism as both Lagos and Ghana Tourism authorities used the day to showcase their Tourism Assets.

Earlier, the Carnival Calabar Dancers and the Ghanaian Carnival queens performed for the 2 days of the event.

Anann in his presentation told the audience about the changes the new administration has brought into Lagos.

Mrs. Oni invited them to visit Lagos and to participate in the One Lagos Festival in December.

Lagos becomes the second Nigerian state to market its tourism abroad after Cross River State and its Carnival Calabar.

Introducing Lagos State at the event,organiser of Accra Weizo said” Lagos is the place to go for Shopping and Partying. Fashion and Religion are strong draws for one of Africa’s most exciting city. With over 10 daily flights by AWA, Arik, Air Peace, ASKY, Rwandair and Air Namibia 50 minutes at most you are home to fun in Lagos. Lagos is tapping into the desire of Africans to know Lagos. Ghana Kenya and South Africa are the lowest hanging Tourism fruits for Lagos. Outside UK and the Diasporan Market in the USA, Ghana is the best place to Market ”

Earlier on in the week the 42 Tour Operators and media from outside Ghana were taken on a Tour of Volta and Eastern Region of Ghana.

For three days they were taken to the Tafi Atome Monkey Sanctuary and the Akosombo Dam. After a day at Ho they went down to Akosombo town for a night before leaving for Accra. Members of the team spent three days touring the two regions before joining others in Accra.

75 foreign delegates participated in the 2 day expo and were joined by over 200 Ghanaian travel professionals.

In his speech at the event the Acting CEO of GTA Mr Akwesi Agyeman praised Lagos for Joining the Weizo family.

He promised that Ghana will sign a long time MOU with the organisers to draw in More Ghanaians to attend Accra Weizo.

He congratulated the organisers for sustaining the event for four years.

Ghana he says will be in Lagos for Akwaaba African Travel Market in September.