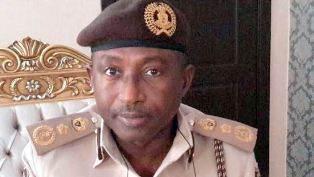 The Nigeria Immigration Service (NIS) has suspended the collection of $90 biometric Visa-On- Arrival policy it introduced about two weeks ago at international airports across the country.

Checks by AbelNews revealed that the service was not in charge of collection of charges at the international wing of the Murtala Muhammed Airport (MMA), Lagos as that aspect has been concessioned out to private firms.

The online news platform, who was at the terminal today noted that that the biometric policy, which started on June 12, was only implemented for two days, but was later suspended following complaints from some foreign travelers, who alleged that they were being made to pay twice .

AbelNews also learnt that these complaints made the Comptroller General Immigration, Muhammed Babandede, to order that the new policy be suspended forthwith.

Recalled a report had said on Monday that the NIS Airport Command introduced the $90(about N32,850.00) biometric visa on arrival and additional $20(about N7,300) as processing fee for foreigners, who were entering the country despite the fact that they had already paid for visas from their respective countries.

The report also alleged that the introduction of the charges caused chaos at the terminal as some of the passengers delayed on arrival at the airport.

However, a very reliable source told AbelNews that some of the services initially handled by the service had been concessioned out to private firms ,who has partnership with the Ministry of Interior.

The online platform also discovered that the biometric Visa-On Arrival charges was handled by Online Integrated Service (OIS) while the process charges is handled by New Works and both have partnership with the Ministry of Interior.

AbelNews also learnt that the biometric charges were supposed to be reciprocity as some countries was already charging Nigerian citizens, who travel into their countries the biometric fee.

Some of the countries that have started implementing the biometric charges on Nigerian travelers according to investigations are United Kingdom, United States of America, South Africa, Kenya and China among others.

A source, who spoke to AbelNews said, “Our officers at the Lagos Airport don’t collect any charges from any traveller. The only thing our officers do at the airport so is just to profile passports of travellers and ensure that those without concrete missions do not enter our country. It is true that we commenced the collection of biometric charges for travellers, but the policy was suspended within two days because of inadequate publicities. But, we are not reinventing the wheels because this thing is reciprocity. Some of these countries charge our citizens the same amount of money we intend to charge them.”

When AbelNews contacted the Comptroller of Immigration, Airport Command to state NIS side of the story, he declined to speak instead referred the news platform to NIS headquarters in Abuja.