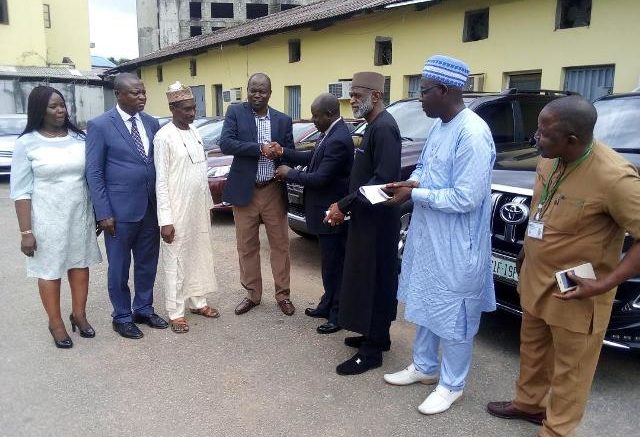 Independent Corrupt Practices Commission (ICPC) has handed over to the Federal Airports Authority of Nigeria (FAAN) 17 vehicles that were recovered from ex -officials of the agency, who alleged took them away

This was disclosed by the Zonal Commissioner, South West, ICPC, Shintema Binga, shortly before handing over the 17 vehicles to the Managing Director of FAAN, Engr. Saleh Dunoma, who as represented by the Director of Operations, Engr. Salisu Daura at a brief ceremony at FAAN headquarters in Lagos today.

Bang, while speaking shortly before handing over the 17 keys and vehicles, said is here because of the existing relationship between ICPC and FAAN delight at the partnership between the Authority and ICPC.

He also said that FAAN being in partnership ICPC to fight corruption realised that whenever there are incidences of corruption, the agency call on ICPC.

Banga said that FAAN drew ICPC’s attention to the fact that some officials of FAAN after retiring from service left with the vehicles attached to them to carry out their duties while they were in service, adding that having drew the attention of ICPC, it was the commission’s duty to recover these vehicles. According to him, “the partnership is part of the ongoing process to recover the vehicles. We feel we should bring them back to FAAN so that they don’t rust away in ICPC’s office.”

He continued, “It is not the concluding part but part of the ongoing process to fight corruption.”

On his part, the MD’s representative, Engr Daura, said, “It is a dawn of new era in governance. We appreciate ICPC efforts at recovering the vehicles. These vehicles are very important to FAAN.”

The handing over of the vehicles by ICPC has debunked the claim in some quarters that whatever is recovered by ICPC are not returned. This is a testimony.

He commended ICPC for the efforts it made to recover these cars but added that the agency is asking for more, as FAAN officials were still incapacitated because they do not have vehicles to carry out their jobs as they should do. “We urged you to do more to recovers others that are still with some officials. We look forward to more collaborative efforts at recovering these vehicles,” Daura said.

On the claim in some quarters that the officials were supposed to go with the vehicle, Daura said that the cars were procured through a loan agreement obtained from First Bank, adding that the vehicles are jointly owned by FAAN and First Bank.

He added that both FAAN and First Bank have the documents to these cars, adding that no party can on its own sell these vehicles