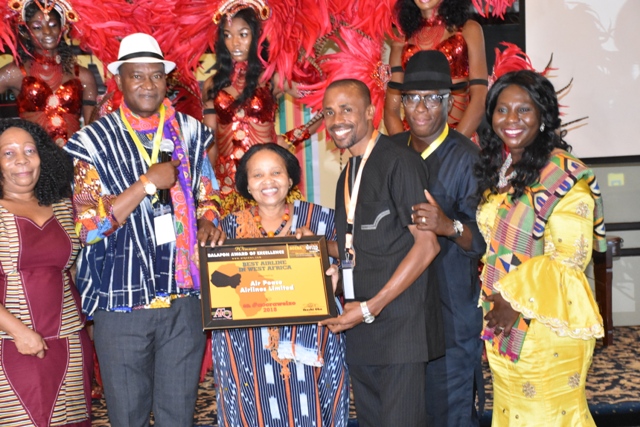 * Air Peace Corporate Communications Manager, Mr. Chris Iwarah (3rd right) receiving the carrier’s Balafon Award for Best Airline of the Year in West Africa 2018 from the Organiser of Accra Weizo and Publisher of ATQ News, Mr. Ikechi Uko (2nd left) and other dignitaries at the 4th Accra Weizo in Accra, Ghana on Friday

The award is coming barely 16 months after launching its regional flight services.

The airline was presented with the award at the opening session of the 4th Accra Weizo in Accra, Ghana on Friday.

The airline added Freetown (Sierra Leone), Banjul (The Gambia) and Dakar (Senegal) to its regional route network a year after on February 19, 2018.

Organiser of the 4th Accra Weizo and Publisher of ATQ News, Mr. Ikechi Uko, said Air Peace emerged winner of the Balafon Award because of the efficiency it had brought to bear on its regional operations.

The Balafon Awards was instituted by ATQ News in 2009 to recognise individuals and organisations who have distinguished themselves in aviation, travel and tourism in West Africa.

“This award”, Uko said,“recognises your airline as the Best Airline of the Year in West Africa 2018 for your outstanding activities in sustaining functional and efficient operations with expansions in West Africa, thereby adding value to the aviation and travel industry as your airlines continues to thrive in becoming a dominant face across West Africa.”

“With growing routes in several countries in West Africa, Air Peace Airlines is playing a significant role in not only driving the aviation, travel and tourism agenda of your organisation and country and catalysing the growth of tourism in the sub region, but also helping forge ties between countries in West Africa and Africa with a view to enhancing regional tourism,” he added.

Speaking shortly after receiving the award, Air Peace Corporate Communications Manager, Mr. Chris Iwarah, said the carrier was pleased that its intervention in fixing the challenges of air travel on the West Coast of Africa was yielding positive results.

The carrier, he said, would deepen air connectivity in West Africa by launching its Monrovia service and linking it with its Accra, Abuja and Lagos operations in the next few weeks.

He praised Uko and his team for recognising and rewarding merit.

He assured members of the flying public of better air travel experience in appreciation of their continued support and loyalty to the Air Peace brand.