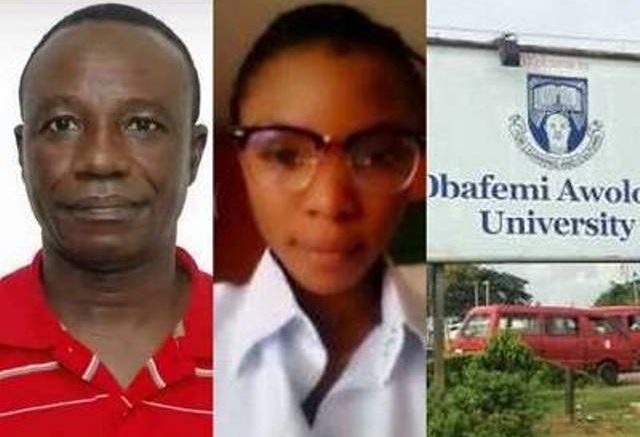 Prof. Akindele, a Professor and lecturer in the Department of Accounting, OAU was alleged to have demanded sex from a female student Monica Osagie to assist her pass exams.

The OAU Vice-Chancellor, Eyitope Ogunbodede, made the dismissal of the randy professor at a press conference in Ile-Ife today.

The VC stated that the Governing Council of the institution decided to sack the lecturer, “having found him guilty of all the charges against him.”

The Council he said after its findings concluded that Professor Akindele had an inappropriate relationship with one of his students, Miss Monica Osagie, a claim to which he admitted.

The VC added that the Prof. had offered to change Osagie’s 33 per cent result to a pass mark, in liu of sexual favours, adding that this fact was established in an audio recording that went viral in early April which Akindele also admitted to.

The VC stated that from the evidence, Miss Osagie had no idea that she scored 45 per cent pass mark as claimed by the randy professor, although the student later found out she did not fail the course.

Ogunbodede noted that the Council, from all findings, found out that Professor Akindele operated in a position of power and authority over Miss Osagie and as such sexually harassed her.

He added that Professor Akindele was found guilty of allegations of misconduct levelled against him with all the evidence at the Council’s disposal, adding that this led to his from the services of the university, to serve as a deterrent to others.