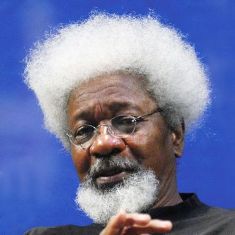 Nobel laureate, Prof. Wole Soyinka, today in Abuja, requested President Muhammadu Buhari to institute an award to ‘‘name and shame’’ all those who truncated Nigeria’s democratic transition with the annulment of June 12, presidential elections.

Speaking at the National Honours Investiture for heroes of democracy, Soyinka said, ‘ Today perhaps is also a day to inaugurate our hall of shame so that as we have hall of heroes in one hand, we also have hall of shame as a lesson to future generations.’’

According to Nobel laureate: ‘‘It is not possible to honour MKO Abiola in one breath and admire his tormentor in another breath. ‘‘Loyalty is all very well but loyalty can become perverse if that loyalty is retained to an individual who if he were alive today will be before the International Criminal Court for crimes against humanity.

Soyinka, who did not mention the name of the Nigerian, described him as one who ‘‘broke the laws of Nigeria, broke international law and committed crimes against humanity.’’

He added, “It is confusing if professional loyalty is carried so far as to be accorded to such an individual.”

The Nobel laureate recounted his private conversation with the President, where he had argued why a notorious corrupt ruler was honoured by the Federal Government while the martyrs of democracy and philanthropists were left unhonoured.

Soyinka commended the President for tendering an apology to Nigerians and the family of Chief MKO Abiola for the wrong done to democracy in 1993 by the annulment of the June 12 presidential elections.

“There are too many traumatised individuals walking the streets as a result of the policies and attitudes of one of the most brutal dictators that this nation has ever known. ‘Closure will come by responding to those traumatised individuals, the victims of unspeakable tortures, some of whom were compelled to watch their beloved ones being tortured,’’ he said.

Soyinka, therefore, appealed to the Federal Government not to forget the ‘‘nameless and unsung heroes and heroines of the June 12 struggle”. (NAN)

Be the first to comment on "Soyinka To Buhari: Institute ‘Hall Of Shame’ Award"