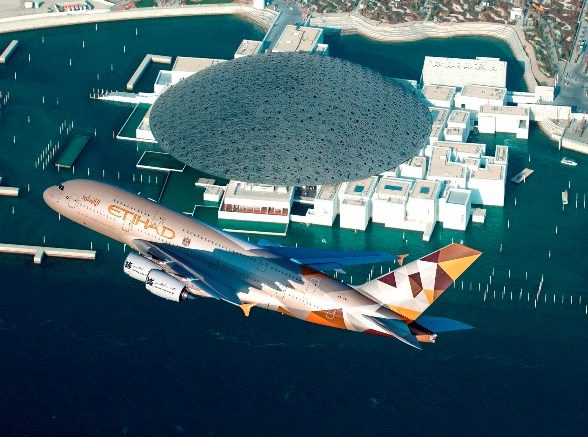 Etihad Airway has stated that it would operate the Airbus A380 on its second daily service linking Abu Dhabi and Paris Charles de Gaulle effect from October 1, 2018

This, the airline further stated would transform the airline’s operation between the UAE and French capitals into a year-round all-A380 service, joining London Heathrow as the second European destination enjoying daily multiple visits by Etihad’s award-winning double-decker aircraft.

The introduction of the aircraft on the second daily service will provide business and leisure travellers between both cities with more options to experience Etihad’s latest award-winning cabins and products.

The airline has operated the A380 between Abu Dhabi and Paris on one of its two daily flights since July 1 2017, with the service performing very strongly since its introduction.

Speaking on the development,Etihad Airways, Chief Executive Officer, Peter Baumgartner, said, “Paris has always been a very special destination on the Etihad network and the number of visitors from France to Abu Dhabi, and vice versa has continued to show significant growth. The route has never been more in demand.”

“We have seized the opportunity to place our flagship Airbus A380 on our second daily flight, following the great reception the aircraft has received from our guests, and to ensure we offer product consistency on the route. This will also allow us to significantly increase the number of leisure and premium seats available, providing more options for those wanting to travel point-to-point between Abu Dhabi and Paris, two capitals now also united by Louvre museums, or to connect via our Abu Dhabi hub to points all over the Middle East, Asia and Australia.”

Etihad Airways’ A380s feature a total capacity of 496 seats – up to two in The Residence, nine in First Class, 70 in Business Class and 415 in the Economy Class cabin. The aircraft replaces the currently deployed Boeing 777-300ER on the popular route.

The Residence is an ultra-private, three-room suite featuring a living room with a 32” LCD monitor, bedroom with a double bed, separate en-suite shower room and dedicated personal butler.

The 70 Business Studios on the upper deck offer direct aisle access, a fully flat bed and an increase of 20 per cent in personal space.

The Lobby, a luxurious lounge located between the First Class and Business Class cabins, features two comfortable sofas and a staffed bar.

Etihad Airways has enjoyed a codeshare partnership with Air France since October 2012.

Air France places its ‘AF’ code to 11 Etihad destinations in Africa, the Indian Sub-Continent and Australia.