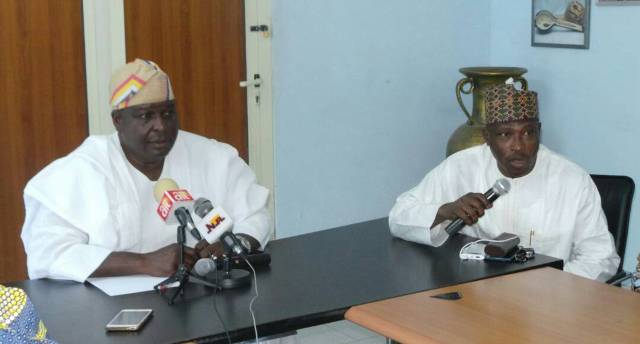 * Director General of the National Council for Arts and Culture, Otunba Runsewe and FTAN President Alhaji Rabo Saleh at the Meeting with NATOP BOT

As part of efforts to resolve the crisis in the Nigeria Association of Tour Operators, (NATOP),which may likely tear the body apart if not well managed, the Director General of the National Council for Arts and Culture, Otunba Segun Runsewe and the President, Federation of Tourism Association of Nigeria (FTAN),Alhaji Rabo Saleh have intervened in the matter.

Runsewe, who is also the President of the World Craft Council Africa met with NATOP Board of Trustees (BOT) to resolve the problem with members.

As a way forward, Runsewe invited leaders of the agitators and NATOP to Abuja to listen to both sides and resolve issues raised at last Annual General Meeting (AGM) of the association.

Runsewe, who went memory lane, told the leaders of association that NATOP that is his baby, adding that he was the one that licenced members of the association in 2011 when he was the DG of NTDC and that he has kept close taps with the affairs of the group.

He added that he has also received two awards from NATOP in the last two years and that he feels obligated to intervene.

Before meeting with Runsewe, the BOT had met at the instance of the President of the Association of Tourism Practitioners of Nigeria (ATPN), Kabir Malan, who is also a member of the Board.

Kabir had urged the Board to address the issues raised in the petition that was circulated by the agitators.

The meeting will be the second one since the induction of the BOT. The first meeting was attended by all members except Iyom Josephine Anenih.

Recalled that to ensure the speedy resolution of the crisis, the BOT had agreed to allow Tourism Elders including the DG Otunba Runsewe, FTAN and Chief Amachree Nigeria’s Father of Tourism to mediate.

The President of NATOP was also asked to call for a general meeting in July of members, who were up to date on the AGM and a committee will look into the criminal and illegal filming of the meeting.

Be the first to comment on "Runsewe, FTAN President Intervenes In NATOP Crisis"