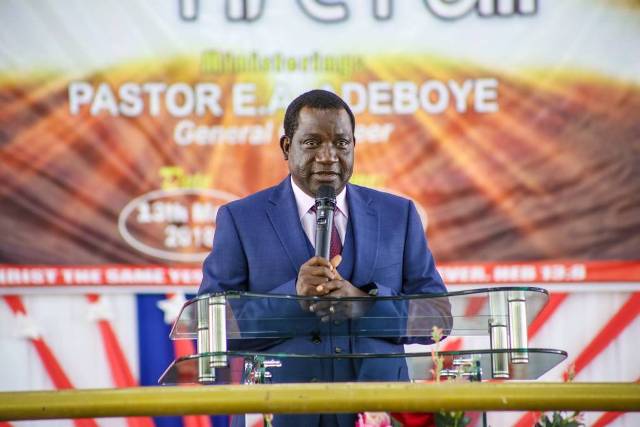 Governor of Plateau State, Simon Lalong has commiserated with the Christian Association of Nigeria(CAN) on the death of its General Secretary, Dr. Musa Asake.

Lalong in an online statement issued by the State Commissioner for Information and Communication, Mr Yakubu Dati described Rev Asake as a courageous leader and prayed that God will give the Christian community and the family, the grace to bear the pain of this great loss. * Gov. Lalong,the General Overseer of the Church, Pastor Enoch Adeboye at the interdenominational service in Jos.

Governor Lalong, the statement said expressed the condolences of the government and people of Plateau State at the Redeemed Christian Church of God(RCCG) interdenominational service in Jos.

Delivering his sermon, General Overseer(GO) of the Church, Pastor Enoch Adeboye, who spoke on the theme, “Let the fire fall” and also prayed for the peace of Plateau State. * Plateau State,Commissioner for Information and Communication, Mr Yakubu Dati and other members of the congregation at the service

The governor was accompanied by some members of the state executive council to the church service.

Asake, who died Friday, May 11, 2018 in Abuja is an indigene of Southern Kaduna and has been vocal in the defence of Christianity in Nigeria.

Before his demise Asake he led a nationwide protest organised by CAN against the killing of Christians by suspected Fulani herdsmen that generated a lot outrage.