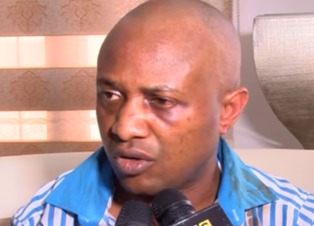 There was mild drama on Monday at a Lagos High Court sitting at Igbosere when suspected billionaire kidnap kingpin, Chukwudumeme Onwuamadike a.k.a Evans, who was handcuffed into the court room raised his hand while in the dock that he had something to say to the court after he had earlier refused to come down from the Black Maria.

According to Vanguardngr.com, the Lagos State Government had brought a fresh five-count charge bordering on conspiracy to kidnap, kidnapping and attempted murder against Evans and three others.

In the second charge, Evans is being tried alongside Joseph Emeka, Linus Okpara and Victor Aduba.

Evans who came in a torn greed Tee shirt and a short with bare foot to the court, told Justice Adedayo Akintoye that he was not being treated well in the prison, he said that they don’t allow any visitation and that he can hardly see far.

Evans said, “I have an explanation to make, since I have been in the maximum prison, they have been maltreating me, no visit, they don’t feed me well, I have eye problem and I cannot see far”.

However the prison warder from Kirikiri Maximum Prison, told the court that Evans, is being taken care of like every other inmates, and that he has been seeing a doctor since he complained about his health.

The warder said, “We have been treating him very well, he is well fed and people have been visiting him, doctor has been checking him, the doctor came to check him yesterday and even this morning before coming to court. Because he was saying he can’t be in court that he is not feeling fine, but when the doctor checked him yesterday and this morning, the doctor said he was healthy and that he see no reason why he can’t be in court”.

But Evans interrupted the prison warder that it was a nurse that came to check him, and not a doctor, and that he was only allowed one visit.

The second defendant’s counsel Ogedi Ogu, also told the court that his client has also been complaining of the same thing. In her response to the alleged maltreatment of the defendants the State Director for Public Prosecutions (DPP), Ms Titilayo Shitta-Bey, said that Evans was just making it up, as he is being treated well, and that doctor has also been attending to him.

She said, “That was the same thing he said before an Ikeja High Court and we wrote the prisons and they wrote us back that he was being taken care of like every other inmate.”

Justice Akintoye however asked the prisons to ensure that he was well taken care of like the other inmates adding that the defendants are still presumed innocent until proven guilty.

However Justice Akintoye stood down the matter pending when the first defendant’s counsel, Mr Olukoya Ogungbeje will be around.

After the Court rose Evans broke down in tears and said that he was being maltreated. “What have done to you people, they have been beating me, no good food I have been locked up in one place since August 30last, why are they taking my case personal?” Evans asked.

Let me face my trial alive, why do you people want to kill me.”

He continued even when his lawyer Ogungbeje came and was trying to pacify him.

Ogungbeje shouted at the prison warders and also asked one of the warders to get out of the place where he was pacifying Evans just before the judge came out.

Earlier when the case was called the first defendant refused to come down from the Black Maria, until the court ordered that the prison warders should go and bring him into the court.

He was brought into the court with his back filled with sand and is green Tee Shirt torn on the right shoulder and walked in bear footed in handcuffs.

She said, “After he sent in a letter that he had an appeal before the court of appeal, we later discovered that the appeal was already taken on March 20 and not on March 22.

However Evans was arraigned alongside Joseph Emeka, Linus Okpara and Victor Aduba on a two count charge of conspiracy and unlawful capture, preferred against them by the Lagos State prosecution.

Evans, alongside the three defendants and others who are still at large, allegedly conspired amongst themselves and unlawfully captured one Uche Okorafor, on 21 of November 2014, at Festac Town Lagos and demanded for a random of $2million dollars.

According to the prosecutor the offences committed are Punishable Under Sections 409 and 269, of the criminal laws of Lagos State 2011.

Vanguardngr.com reports that at the last adjourned date Justice Adedayo Akintoye dismissed the defendants application to quash the charge against them, she said that the charge presently constituted against the suspected kidnap kingpin, Chukwudumeme Onwuamadike a.k.a Evans, “are not defective and not an abuse of court processes”.

Akintoye said this while ruling on the application brought by the kingpin asking the court to quash the two separate charges filed against him by the Lagos State Government.

Justice Akintoye had said based on the proof of evidence before the court, issue for determination was whether a prima facie case has been established against the defendants.

She, however, said that a prima facie case is established where the court finds that there are grounds for proceedings, adding that the proof of evidence must sufficiently link the defendant to the offence allegedly committed.

“Looking closely to the proof of evidence attached to the information in this case, a prima facie case has clearly been disclosed against the defendant/applicant,” Akintoye said.

“Other defendants participated in several kidnappings and shared the ransom collected from their victims.

The alleged kidnap kingpin was arrested on June 10, 2017 and was in August 2017 arraigned before Justice Hakeem Oshodi at an Ikeja High Court for kidnapping.