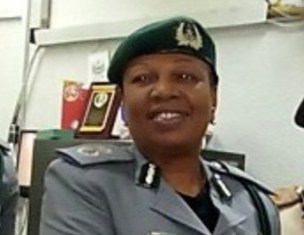 The Nigeria Customs Service (NCS),at the international wing of the Murtala Muhammed Airport (MMA), Lagos Command has raked in at least N11.6billion in the first quarter of this year.

A statement issued by the image maker of the command, Mr. Ephraim Haruna, said that the figure generated represents 74.34 per cent of the projected revenue for the quarter under review.

He explained that in the first month of Mrs. Jayne Shoboiki, as the new Customs Area Comptroller (CAC), the command generated over 4.12 billion despite the public holidays within the month, which prevented its officials from carrying out their duties.

He also explained that within the period under review, the command made very important seizure of consignments of Military Hardware imported into the Country, which were intercepted at both Nigerian Aviation Handling Company (NAHCo) Plc shed and the Skyway Aviation Handling Company Limited (SAHCOL) Shed with different airway bill numbers and different Importers and organisations.

Others are: 20 pieces of assorted optical sight wrapped in a military camouflage uniform bags, mainly for riffles and grenade launcher, military knee/shin guards, handcuffs, police official cardigans, drones, 108 cartons of expired (2009) Beef imported into the Country, pangolin scales and Tramadol tablets with no of the National Agency for Food and Drug Administration and Control (NAFDAC) to be exported out of the Country, among others.

The statement issued by Haruna quoted the CAC as advising clearing agents to enlighten the importers to desist from bringing into the country prohibited items, adding that military hard wares were not to be imported by an individuals.

She said such items must come into the country with an end user certificate, which she said the importers do not have.

According to her, “We have enough fresh beef in this country, I see no reason someone will import not only beef but expired one. The item is under the import prohibition list, schedule three, item two of the Common External Tariff (CET), was abandoned and all effort made to arrest the consignee proved abortive as the address mentioned does not exist.”

She attributed the high revenue profile generated in the first quarter and the remarkable seizures to the officers at the command, as according to her they have keyed into the strategies put in place to block all possible revenue leakages.

In line with the Comptroller-General and the Federal Government policy of ease of doing business, the statement said that Shoboiki has eliminated some of the duplications in the clearing processes.