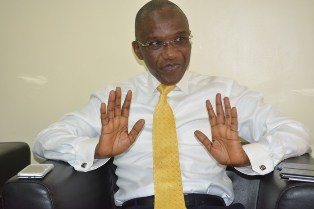 The Managing Director/Chief Executive Officer, Asset Management Corporation of Nigeria (AMCON), Mr. Ahmed Kuru, has stated the corporation purchased non-performing loans of about N181 billion from various banks to stabilise and revitalize companies 90 per cent of which are in the aviation industry.

This is just as he added that additional un-lending facilities of almost N40 billion on very good terms was also provided for these companies by AMCON in collaboration with the Central Bank of Nigeria (CBN) and Bank of Industry (BOI) .

The Senior Vice President AMCON, Mr. Kamilu Omokide, presented   the  paper titled,” AMCON’s Intervention in Transport and Allied Sector: Achievements, Challenges and Prospects” on behalf of Kuru at the 6th Nigeria Transport Awards and Lecture organised by TransportDay Newspaper in Lagos at the weekend.

He added that despite the corporation efforts at ensuring that these companies such as Arik, Aero and others thrives, the entities could neither pay the old nor pay the new loans, adding this forced AMCON to appoint Receiver Managers.

According to him, “AMCON was created to be a stabilizing and revitalizing tool in the Nigerian economy. Towards achieving our mandate, we purchased non-performing loans of about N181 billion from various banks. Over 90 per cent of this was in the aviation sector. To place the companies in a position to recover and generate adequate cash flow, we gave additional un-lending facilities (in collaboration with CBN and BOI) of almost N40billion on very good terms. Unfortunately, notwithstanding this support, the companies could neither pay the old nor new loans. We have therefore been compelled to appoint Receiver Managers over a lot of the companies, the biggest being Arik and Aero.”

He pointed out that AMCON’s intervention through the instrumentality of Receiver Management was first to stabilise the operations of the airlines, put them in a position to generate positive cash flow, then resolve their debt situation through either the owners paying the debts or the sale of the companies/underlining assets.

Speaking further, he said, “Specifically, our intervention in Arik and Aero were intended to be value adding and non-destructive. It is noteworthy that the corporation has adopted a similar approach to the revitalization of Peugeot Automobile of Nigeria (PAN), which today is back to operation and assembling vehicles for the road transport sector.”

On AMCON’s achievements, Omokide explained that at the point of intervening in Arik, the company was witnessing a high spate of flight cancellations of up to 40 per cent, on-time performance (OTP), which measures the promptness of schedule flights had fallen to as low as 15 per cent, staff, including pilots were owed salaries, in some cases for up to six months and staff morale was therefore understandably low.

He also said that at Arik Air several service providers including fuel marketers, maintenance and spare part companies were withdrawing services or were unwilling to extend credits, adding that there were indeed significant concerns at various governmental cycles for safety and the possible impact of the collapse of the company on the economy.

On the success at Arik Air after the intervention, Omokide said, “We are glad to report that this position has been largely arrested. Cancellations are down to 4 per cent, OTP is over 60 per cent, all owed salaries of current staff are fully paid, suppliers are now being paid as at when due. This of course has come at a cost to AMCON and not without with the unparalleled support of the Central Bank of Nigeria and local banks.”

He continued, “At Aero, we succeeded in ensuring that the airline remains a going concern. And with the strengthening of its management, we have seen a refocus on the strengths and capabilities of the airline. The Maintenance Repair and Overhaul (MRO) licence has been made active. The airline in February succeeded in completing a c-check on a Boeing 737; a huge feat with a potential for savings in foreign exchange demands by local airlines.”

The AMCON boss stated that the intervention in the sector had ensured that Nigerians are offered choices, there is an enhanced positive competition leading to improved service offering for the flying public,

He added that as a major policy drive of this government, AMCON’s intervention was able to save over 3,000 direct jobs and hundreds of indirect jobs in the airline industry, adding that corporation is indeed proud to have played this important role.

Be the first to comment on "AMCON Bought About N181B Non –Performing Loans To Stabilise, Revatalise Coys In Aviation Industry—Kuru"