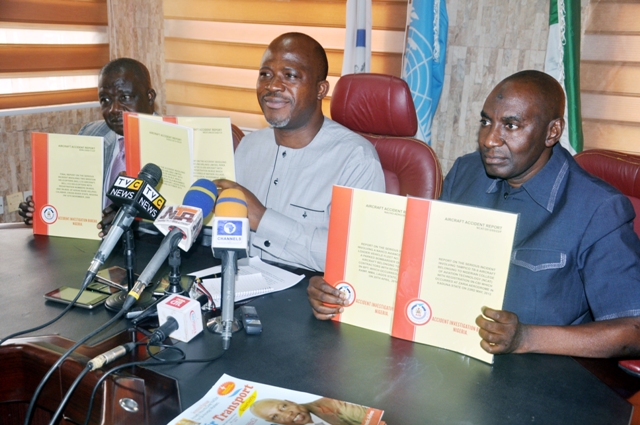 The Accident Investigation Bureau (AIB) has released six final reports on accidents and serious incidents that occurred between 2009 and 2014, iincluding that of Associated Airlines aircraft Embraer 120 ER with registration 5N-BJY that crashed at the Murtala Muhammed Airport, Lagos on October 3, 2013 that claimed the lives of 11 passengers, 5 crew and with 2 crew and 2 passengers seriously injured.

Recalled that the ill fated airplane as at the time of accident carrying 13 passengers ,seven crew and the remains of the former Minister of Aviation, Dr Olusegun Agagu to Akure

The reports were released today by the Commissioner of AIB, Engr. Akin Olateru at the agency’s corporate headquarters at the Murtala Muhammed Airport (MMA), Lagos .

On the Associated Airline, the report released by AIB cited as its causal factor the decision of the crew to continue the take-off despite the abnormal number 2 Propeller indication warning and the low altitude stall as a result of low thrust at start of roll for take-off from number 2 engine caused by an undetermined malfunction of the propeller control unit.

The AIB report contributory factor fingered the aircraft being rotated before attaining V1, the decision to continue the take-off with flap configuration warning and auto-feather warning at low speed, On the Westlink Airlines’ Piper Aztec 23-250 aircraft accident, AIB identified inadequate visual lookout and failure to avoid the obstacle by the pilots as the only causal factor responsible for the accident.

The contributory factors included less than adequate planning and preparation for the flight, inadequate pilot training and experience on agricultural aerial work and limited regulatory guidance and oversight on agricultural operations.

It also made four safety recommendations to NCAA in its report.

Other final reports released by the accident investigation body include on the serious incident involving two Bristow Helicopters (Nig.) Ltd aircraft, Bell 412 helicopters with registration numbers 5N-BGS and 5N-BDD, which occurred at the Addax Base Helipad, Calabar, Cross River State, Nigeria on November 12, 2009.

On Associated Airline crash, AIB released four safety recommendations, which were all directed at the Nigerian CIVIL Association Authority (NCAA).

The agency called on NCAA to enhance the enforcement of the regulations with regards to the implementation of operators approved personnel training programme and intensification of its safety oversight function on the airline to ensure that flight operations were carried out in accordance with approved operations manuals in line with the provisions of Nigeria Civil Aviation Regulations (NCARs).

Others were improved safety oversight on the affected carrier to ensure staff welfare issues, and that remunerations were settled promptly and the establishment of Confidential Voluntary Reporting System, which must be implemented in line with the State Safety Programme.

On the two Bristow Helicopters serious incidents at the Addax Base Helipad, Calabar in Cross River State on November 12, 2009, like Associated Airways, AIB also made four safety recommendations.

The AIB report, however, stated that NCAA responded to the safety recommendations of the bureau and implemented them.

In its report, AIB said that NAHCo personnel, who operated the baggage loader vehicle was neither employed to operate the vehicle, nor was he authorised to do so.

The report observed that the rostered driver of the baggage loader vehicle was not available at the time of the occurrence and cited the non-adherence to NAHCo Safe Operating Procedures by the Ramp manager as one of the contributory factors to the incident.

The report also made four safety recommendations to NCAA, which included ‘strict adherence to NAHCo’s Standard Operating Procedures’ and ‘Air Operators’ Certificate (AOC) holders should determine the minimum number of personnel for airline ground handling operations to be deployed for each aircraft type.’

Be the first to comment on "AIB Releases Associated Airline, Five Other Final Reports"