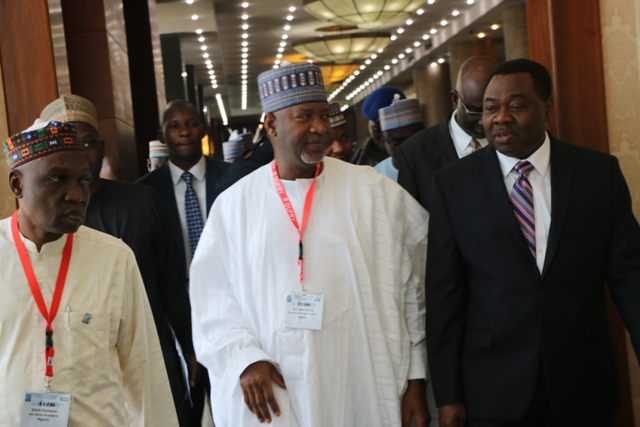 *From Left MD of FAAN, Engr. Saleh Dunoma, Minister of State for Aviation, Senator Hadi Sirika(middle) and the President of ICAO, ,Dr. Bernard Aliu at the 59th ACI Africa in Lagos today

The Managing Director, Federal Airports Authority of Nigeria (FAAN), Engr. Saleh Dunoma has said that Nigeria has been in the forefront of striving to attain the highest levels of safety standards in Africa’s aviation industry

He further posited that with the assistance of the ACI Africa initiated Airport Excellence (APEX) in safety programme; the agency was able to certify two of Nigeria’s busiest airports; Lagos and Abuja

He spoke at the ongoing 59th ACI Board and Committees Meetings and Regional Conference and Exhibition in Lagos, Nigeria.

Dunoma, who commended the ACI Africa for given FAAN the opportunity to host both global and regional giants of the industry, told the gathering of aviation professionals and experts that the APEX review for Kano and Port Harcourt airports was carried out in March while reviews for Enugu and Kaduna airports are scheduled for June.

The evolving nature of airport management, the FAAN Managing Director, said demands a transformation of airports that now mostly serve as public service providers and not commercial enterprises that are efficiently managed to generate more revenues and subsequently declare profits. He stated that the essence of the ongoing ACI event was to seek ways of  achieving  this unique goal of transforming airports into viable, sustainable business entities and  that looking at the sessions lined up for the conference, he was very sure that those present would be imparted with knowledge and ideas that would facilitate and accelerate the agency’s quests for financial liberation and transformation.

On the relationship between FAAN and ACI Africa, Dunoma said that it spans over a decade and that it has been a worthwhile and mutually benefitting relationship.

“I am proud to say that the same mutually benefitting relationship ‘ is enjoyed by other members of ACI Africa,”he said.

AC1 Africa, he added  work with its members and also liaises with other international bodies such ACI World, the International Civil Aviation Organisation(ICAO) among others to ensure improved human capacity development by providing various standard and customised trainings in different skill areas to ensure safe, secure and efficiently managed airports.

According to him, “Last year, Nigeria signed the agreement to become one of the ‘ AC1 global training centers, to further advance the goal of human capacity development in FAAN and in Africa. The first training after the agreement was conducted in December 2017 where Nigeria received participants from other African countries. “

He continued, “Over the years, ACI Africa had focused on safety as a priority leading to the initiation of the world wide acknowledged Airport Excellence (APEX) in safety programme. This has recorded great achievements as major airports continue to requests for this programme.”

He Commended the Minister for State, Aviation, Senator Hadi Sirika and his team, the Senate, House Committees on Aviation and sponsors for the continuous support FAAN enjoys from them.