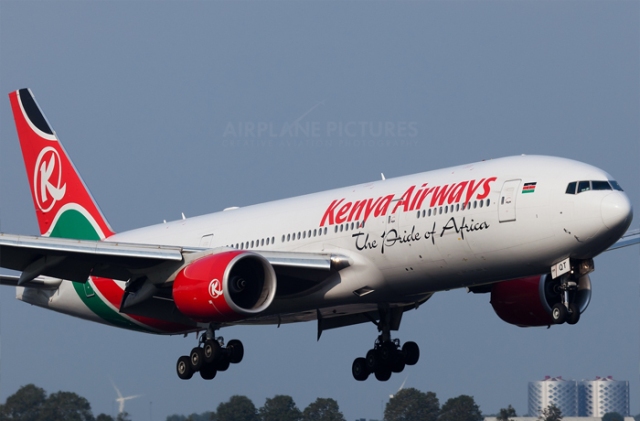 …Says The Unions Failed Their Members

Kenya Airways has said that it made several attempts to meet with aviation unions on the planned lay off some redundant workers on payroll, but that the unions were dodging meeting with the management of the airline.

The airline’s reaction is contained in a letter signed by the Acting Chief Human Resources Officer, Kenya Airways Bridgette Imbuga.

The letter, which was made available to AbelNews with the reference number: IR/NUATE/11/04/2018/BF dated April 11, 2018, sent to the General Secretary of the National Union of Air Transport Employees (NUATE) said that the airline as at January 15, 2018 notified the union of its redundancy plan and called for a meeting with the airline, which the union refused to honour.

The letter further stated that NUATE on its own scheduled meetings for different dates: February 15, 2018, February 26, 2018, March 6, 2018, March 16, 2018 and April 5, 2018 to meet with the Kenya Airways management but that the same union failed to turn up for the meeting on these dates, adding that instead the union gave excuses why it could not come for the meetings.

“Despite our displeasure, we dutifully indulged you and agreed to hold the meeting on the 16th March 2018. Although, you kept us waiting at your national secretariat conference room for the better part of the afternoon, you finally turned up for the meeting at 4:30pm local time on the 16th March 2018. However, you declined to discuss the redundancy subject and instead proposed that we pick another date to specifically negotiate the redundancy payments. After considering each parties commitments, you personally proposed 5th April 2018, which we mutually accepted and firmed up. It was therefore shockingly disappointed and unexpected that you failed to attend the meeting on the agreed date without any apologies or prior notification notwithstanding the fact that the management team had travelled to Lagos and were more punctually present for the meeting at the appointed venue, “the letter read in part.

The letter continued, “From the foregoing, it is clear that you are unwilling or uninterested in engaging management in negotiations on such an important matter affecting employees who are your members. On our part, we have demonstrated our willingness and commitment to use our best endeavours to negotiate separation terms for the employees who will be affected by the redundancy.”

Kenya Airways reaction became necessary as a result of  threats by the unions to picket the airline’s office following the airline’s sacking of 22 of the 26 Nigerian employees in its pay role.

The sack,  the unions claimed represents 86.4 per cent of the affected workers.

The General Secretary of the National Union of Air Transport Employees (NUATE), Comrade Olayinka Abioye had confirmed the sack of the 22 workers.

He explained that the unilateral sack of the workers by the airline would not be allowed to stand by the industry unions, describing the sack as illegal.

According to him, “We have been agitating for the review of terms and conditions of employment in Kenya Airways for about two years. We started the process and somewhere along the line, the management of Kenya Airways said they were doing restructuring exercise because of the financial conditions of the airline. In the meantime, we have even agreed to certain reviews approved by both parties and only waiting for implementation.”

He continued, “That was one of the reasons we embarked on the picketing we did last December. Then, after the picketing, we were invited and we concluded the review after the review, we discovered that our Nigerian staff were being owed about 26 months monetary benefits. They claimed that they won’t be able to pay all, but after the consultations, we agreed for 16 months to be paid the workers In between, they introduced a new shift into the discussion, saying that going forward they want to replace all business plans with new business plans called General Sales Agent (GSA), which means they want to engage a travelling agency to handle the ticket sales and reservation and all the workers would be sacked.”

The unions, he stated had informed the Director-General of the Nigerian Civil Aviation Authority (NCAA), Capt. Muhtar Usman of its intention to picket the operations of the airline any moment from now.

He also stated that the Minister of State for Aviation, Sen. Hadi Sirika would also be notified of about the action of Kenya Airways and the decision of the unions.