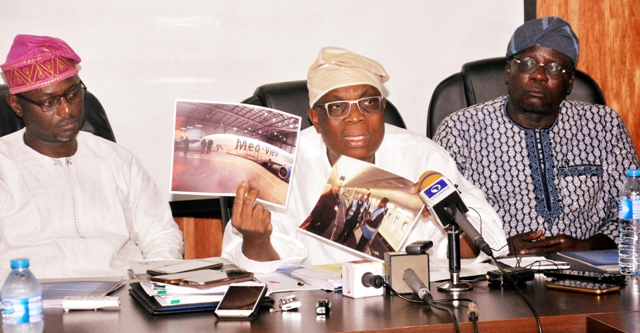 …We Own Our Aircraft Bankole Insists

Despite insinuations in some quarters about the state of the four aircraft in Med-View Airline’s fleet, the airline has insisted and stated categorically that it owns the four airplanes in its fleet

This is just as it disclosed that the airline has commenced the rationalisation of its workforce, which has affected 52 staff from both technical and administration.

The Managing Director of Med-View, Alhaji Muneer Bankole stated this during an interactive session with aviation correspondents at the carrier’s corporate headquarters in Lagos at the weekend.

According to Bankole, “Med-View Airline Owns the four aircraft and the best way to survive in business is to own your assets”

To clarify the insinuations making the round on the ownership of the airplanes, Bankole provided and showed journalists at the event documentary evidence to back his argument.

To further buttress his point, the Chief Executive Officer disclosed that with the support of its banker; First Bank, Med-View, bought two additional aircraft.

He also revealed that two of the airline’s aircraft, which includes Boeing 777 were undergoing maintenance, while the other aircraft named Abeke is currently in a London facility being re-configured from 221 to 241 seats.

The Med-View boss added the maintenance of two of its aircraft abroad necessitated the restructuring of the carrier’s operations. * From left, Managing Director/CEO, Med-View Airline Plc, Alhaji Muneer Bankole, Chief Operating Officer, Mr Michael Ajigbotoso and Chief Pilot, Capt. Stephen Fevrier at a press briefing on the Airline Aircraft undergoing Maintenance Repair and Overhaul ( MRO) and Reconfiguration outside the country. during a media Chat with MD/CEO at the weekend

According to him, “The 777 is undergoing C-Check and will be back by May but this affected our scheduled operations. When you have two aircraft outside, you restructure your operations and plan your schedule. What we have achieved now, they say charity begins at home, is that instead of flying everywhere and making nonsense of the whole operations, we consolidated our domestic operations and you can see with no challenge we are flying 99.9 per cent capacity.”

On the rationalisation going in the company, the Managing Director said that the airline has laid off 52 staff, adding that the exercise affected both technical and administrative staff.

Med-View airline, he said has 375 employees, 18 stations and three international stations, adding that the rationalisation also affected both captains, engineers and those with disciplinary issues.

“Today, I will tell you that Med-view is carrying out staff rationalisation and that is normal in any business. We came back in January and we announced to staff that we had to carry out this exercise. In January we are not owing anyone and in February we have paid 60 per cent of our colleagues including our pilots but those that were laid off were 52 and we are still doing it,” he said.

He continued, “We had to rationalise their salaries because they have to meet the process and procedures of disengagement, because when they give you a letter you have to go through Human Resources, return your Identification card and we check your books to see if you are not on loan and then they pay your final package.”

In his words, “If you owe a Foreign Service provider you will not last six months. Reason is that the antecedents of the past and many airlines have come and did not last six months then leave a bad taste in the mouth. So what they told us is that we must have a commitment to give 3months. Some of them we rejected, some: putting our credibility in line, we said they should provide us service and we have met that since.”