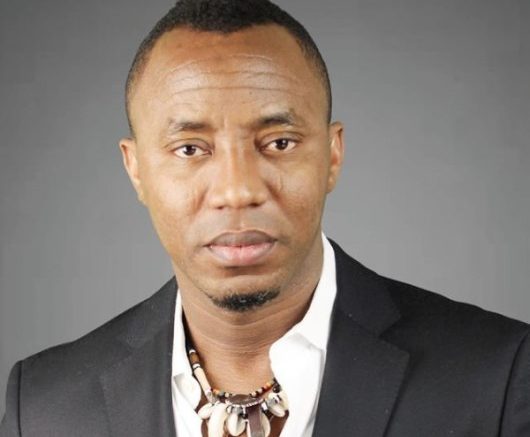 …Says He Is In Nigeria To Lead a Movement, Hold Rallies, Town Hall Meetings

The Publisher of popular news website; Sahara Reporters, Mr. Omoyele Sowore, who declared his interest to contest as a presidential candidate in Nigeria’s 2019 general elections has said that he has the capacity to run Nigeria better than President Muhammadu Buhari even it his sleep. He said this today while speaking to journalists at the international wing of the Murtala Muhammed Airport (MMA), Lagos shortly on arrival from the United States on board Delta Air Lines at 2.30 pm.

“I told you many times that I can run Nigeria better than President Muhammadu Buhari even in my sleep,” Sowore said. Sowore, who was received by a mammoth crowd at the arrival section of the terminal, stated that he came to Nigeria to lead not only a movement but to also hold series of rallies and town hall meetings with Nigerians. On the suggestion in some quarters that he should contest for a lesser position in the 2019 general election, Sowore said, “I have been doing activism for over 30 years and I have never done something less than a national president. So, there is no lesser position and the position that is most important to Nigerians today is the president and I am more than qualified. I told you many times that I can run Nigeria better than President Muhammadu Buhari even in my sleep. There is no need to become a local government councilor or   a senator when I can run Nigeria as the president of the Federal Republic of Nigeria.”

Speaking on the allegation that he is being sponsored by some heavy weight politicians, the Sahara Reporters Publisher, stated that he does not respond to baseless allegations.

In his words, “I don’t respond to allegations that are baseless. As you know, I am a well known journalists and I report with hard facts.I don’t report based on allegations.  I am the most transparent candidate and I am raising my funds online. So there is no truth in that.”