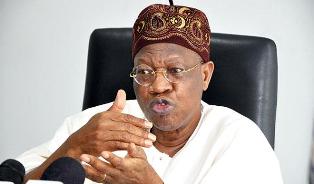 It said the list of alleged looters which it released on Friday was based on verifiable facts, including the amount involved, the date the amount was collected and from where it was taken.

The names released on Friday were the National Chairman of the PDP, Uche Secondus, who allegedly collected N200 million from the office of the former National Security Adviser.

Secondus had, however, denied the allegation and gave Mohammed 72 hours to retract the statement and also pay him N1.5billion as damages.

The last was former President Jonathan’s Cousin, Robert Azibaola, who was said to have collected $40million from NSA office.

While releasing a fresh list of alleged looters in Lagos on Sunday, the Minister of Information and Culture, Alhaji Lai Mohammed, in a statement said the Friday’s list “was strategically released as a teaser.”

He said, ‘’At the press conference where the list was released, I did say it was a tip of the iceberg… the Federal Government has a large number of alleged looters on its list.”

The minister said the PDP’s reaction to the looters’ list has shown that its recent apology was an election-induced act, to deceive unsuspecting Nigerians to vote for the party in the 2019 general elections.

Mohammed said, “The hysterical and panicky reaction from the PDP has shown that the party is not sincere about its choreographed apology. Were it not the case, the party would have followed in the footsteps of one of its leaders, Senator Ibrahim Mantu, who simply owned up to his role in the party’s rigging in the past elections and said he had turned a new leaf.

Mohammed said the Federal Government would neither be intimidated nor blackmailed into silence, adding that it would not rest until all those who looted the public treasury had been brought to justice.

Releasing the fresh list, the minister said based on the Economic and Financial Crimes Commission’s investigation, N126billion, $1.5billion and £5.5million were allegedly embezzled through Sambo Dasuki office as the NSA.

The amounts, it alleged, were apart from the ongoing $2.1billion military equipment scandal.

Mohammed further alleged that a former Petroleum Resources Minister Diezani Alison-Madueke, “in just one of the cases the EFCC is investigating involving her; about N23billion is alleged to have been embezzled. She is also involved in the Strategic Alliance Contracts of the NNPC, where the firms of Jide Omokore and Jide Aluko got oil blocks, but never paid government taxes and royalty. About $3billion was involved. The Federal Government is charging Omokore and Aluko and will use all legal instruments, local and international, to ensure justice.”

He said the EFCC allegedly recovered N13.9billion and N4.8billion from an ex-Army Chief, Lt. Gen. Kenneth Minimah (retd.) in cash and property.

The Peoples Democratic Party, in his reaction, accused the Federal Government of taking over duties of courts in the country.

It said the release of the names of those undergoing trial as “confirmed looters” by the Federal Government was an indication that the government had taken over the functions of the judiciary.

National Publicity Secretary of the PDP, Mr. Kola Ologbondiyan, said that the Federal Government, instead of speaking of how President Muhammadu Buhari got money for his election in 2015, had continued to attack the PDP and its leaders.

He said, “We are not interested in whatever names they are releasing; the government is taking over the duties of the judiciary.

“This government is the worst we have had in the history of our nation. Nigerians will have to endure it till 2019 and vote it out.”

However, a former FCT minister, Bala, had denied the allegations as he had pleaded not guilty to the six counts preferred against him by the Economic and Financial Crimes Commission when he was arraigned before the High Court in Abuja in May 2017.

When contacted, Oduah disconnected calls made to her telephone line. She also did not reply text and WhatsApp messages sent to her.

But Oduah had, in a statement she issued in February, denied diversion of the fund under her watch as Minister of Aviation.

Calls made to Jang and Nwaboshi rang out. They had yet to reply a text message sent to them as of press time.

However, Udechukwu had told our one of  our correspondents that the Federal Government was on a witch-hunt.

In his reaction, Fani-Kayode said the Federal Government was resorting to cheap blackmail because it could not secure his conviction in court.

The former minister said, “The names that should be there is that of President Muhammadu Buhari, Yemi Osinbajo and third, Rotimi Amaechi, Babatunde Fashola, Lai Mohammed, Babachir Lawal, Abdulrasheed Maina, Abdulrahman Dambazau and Isa Jafaru.

“All these persons either donated money or received money during the 2015 elections and these were public funds.”

Fani-Kayode said he received N800m from the then Director of Finance of the Goodluck Jonathan Campaign Organisation, Senator Nenadi Usman.

He, however, argued that the money was not from the government, but from private individuals.