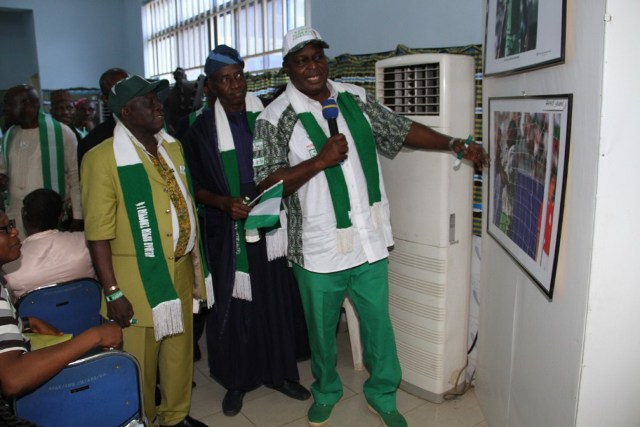 * From right: Chairman of the occasion, Segun Odegbami, President General Nigeria’s Supporters Club, Dr. Rafiu Ladipo and the Director General, National Council for Arts and Culture (NCAC) Otunba Segun Runsewe inspecting the various pictures of both the former Eagles players and the present ones on display during the occasion.

The Director General of National Council for Arts and Culture (NCAC) Otunba Segun Runsewe has re-stated the need to replicate Nigeria’s impressive cultural performance exhibited in South Africa 2010 at the Russia 2018 World Cup coming up in June.

Otunba Runsewe said this in a statement issued in his office in Abuja .

He reminded Nigerians that despite the fact that the Super Eagles did not win the World Cup in South Africa, the country put up a fantastic performance off the field showcasing her rich cultural and tourism potential to the world. He reminisced that one outstanding component adopted by the Nigerian contingent under his leadership then was the Nigerian Village model, which according to was specially crafted and culturally equipped to wow everyone while also leading a successful delegation to the month long event. The NCAC boss recalled that the Nigerian Village idea was a huge success in terms of providing a platform to showcase Nigeria’s rich art and crafts, dress culture, cuisine and tourism prospects thereby drawing attention to everything positive which the country represents. The Director General stated that there was the need to bring back such glory using Russia 2018 as an opportunity to market Nigeria’s rich and diverse culture, art and craft thereby attracting global patronage which according to him will translate to massive Foreign Direct Investment (FDI) for the country even after the fiesta.

He assured Nigerians that the NCAC having initiated a campaign to raise three million culture friendly supporters to cheer the Super Eagles was ready to undertake this responsibility just as he solicited for the support of all Nigerians towards this course.