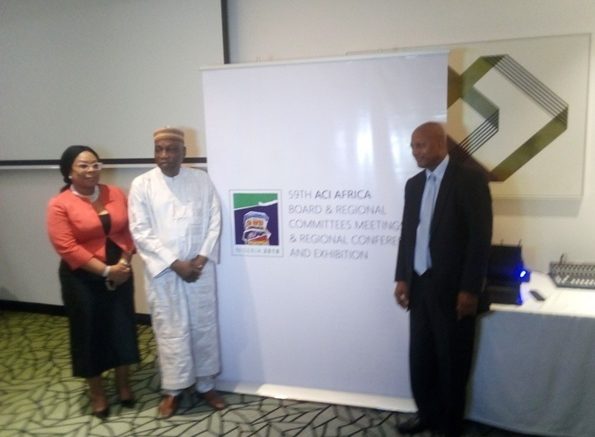 * The Managing Director of FAAN, Engr. Saleh Dunoma((2nd left) Mrs. Adenike Aboderin and the Director of Business Development, Mr . Sadiku Rafindadi during the unveiling of ACI logo today in Lagos

…Partners With Notable Hotels In Lagos

Federal Airports Authority of Nigeria(FAAN) is to host the International Civil Aviation Organisation(ICAO) Council President Dr.Bernard Aliu and over 300 professionals at the 59th Airport Council International (ACI) Africa Board and Regional Committees Meeting & regional Conference and Exhibition In April 19 to 19,2018.

This was made known today by the Managing Director of the Federal Airports Authority of Nigeria(FAAN), Engr. Saleh Dunoma at a Pre –ACI briefing and the unveiling of the event’s logo in Lagos .

He said that ACI is a nonprofit organisation representing commercial airports worldwide and that its structure includes five geographical regions, which include Africa, Asia-Pacific, Europe, Latin America-Caribbean and North America.

Explaining further, Dunoma said that ACI advances the collective interests of and acts as the voice of the world’s airports and the communities they serve and promotes professional excellence in airport management and operations.

Nigeria, the managing director hinted is currently at the helms of affairs in the African airport industry as his currently serving as the President of ACI Africa executive board. This, he added is a pioneer achievement for Nigeria as this is the first time in history that this prestigious position will be occupied by a Nigerian, adding that serving in the capacity as the ACI Africa President will ensure that Nigeria is in the limelight and will also give Nigeria an advantage in decision making as it relates to aviation matters in Africa and the world.

According to him, “Last year, Nigeria signed the agreement to become one of the ACI global training centers, to further advance the goal of human capacity development in FAAN and in Africa. The first training after the agreement was conducted in December 2017 where Nigeria received participants from other African countries.”

Dunoma stated that over the years, ACI Africa had focused on safety as a priority leading to the initiation of the world wide acknowledged Airport Excellence (APEX) in safety programme, adding that this has recorded great achievements as there as has been a drastic decrease in the number of incidents and accidents in Africa.

He stated that in Nigeria, ACI had been of tremendous assistance in the certification process of the Lagos and Abuja airports through the APEX in safety programme, which helped to identify safety gaps in aerodromes.

He added that in recognition of the role played by ACI and in FAAN’s bid to ensure safety at airports, FAAN has commenced the APEX in safety programme in other international airports namely Port Harcourt, Kano, Enugu and Kaduna airports.”

“I am pleased to announce that today is the inaugural day of the week-long APEX in safety review in Port Harcourt which will be closely followed by the APEX review in Kano. The safety reviews for Kaduna and Enugu will be carried out in May of this year. FAAN is engaging a proactive means of mitigating risks and ensuring the overall safety of our passengers.” Dunoma

On the gains of ACI in Nigeria, the FAAN boss said that part of the gains is that Nigeria was able to sign Memorandum of Association (MoU) that will transform FAAN’s training, adding that the trainings are not paid but free of charge. `

He stated that with Nigeria in the helms of affairs , African airports not only speak with one voice but that the voices of airports in the continent can now being heard compared to before.

To ensure that the over 300 guest coming for the event are comfortable during their stay in Nigeria, Dunoma said that FAAN would partner with some notable hotels in Lagos such as Radison Blu , Oriental ,Four Point By Sheraton  among others .

He listed the sessions that will be held at the event to include: innovation in airport business, business innovation in Airport retail, the future of Airport tax free shops and changing leadership Others are: mindsets for succeed transformation, the future of Airport charges and taxes and technology to support business transformation among others .

Be the first to comment on "FAAN To Host ICAO President, Over 300 Professionals At 59Th ACI Conference In Lagos"