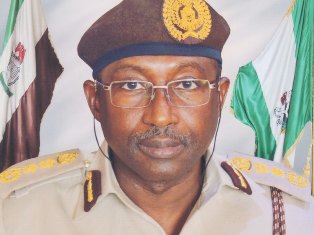 …Say It Has Right To Check Travel Documents

As part of efforts to ensure that its officials at the Murtala Muhammed International Airport (MMIA), Lagos, Command are accountable, easily identified in the event of lapses and carry out their duties effectively, the Nigeria Immigration Service (NIS) has tagged the counters of its personnel at the airport.

The NIS explained that it was part of the Ease of Doing Business policy that was introduced by the Federal Government in July 2017.

This is just as the service also stated that its officers are up and doing in the discharge of their duties, not just at airports, but in other Commands .

Investigation by Abelnewsng.com observed that NIS officers on duty at the international wing of the Murtala Muhammed Airport (MMA) had removable tag placed on his counter while attending to arriving or departing passengers.

When Abelnews visited the international terminal to see things himself, it also observed that all the about 16 counters allocated to immigration officers for processing for arriving passengers were tagged while the same was also done for departing passengers.

A source, who spoke to Abelnews on the condition of anonymity because he was not authorised to speak stated that tag is removed when an officer finishes his or her duty while a new officer, who reports for duty also put his name into the tag for easy identification.

Speaking further, the source stated that the Comptroller General Immigration Service, Mohammed Babandede ordered the current arrangement for proper and easy identification of officers especially those, who have contact with passengers. Also, a top officer at the airport, who also does not want to be indentified, explained that compelling officers’ counters to be tagged was to ensure easy identification and accountability of officers.

The officer contended that NIS officials be at airports or any other gateways into the country have the right to check the travelling documents of any traveller departing or arriving the country.

The officer stated that since the Ease of Doing Business was introduced by the Federal Government, the Comptroller General had done a lot to monitor the activities of officers at the airport with the introduction of visa on arrival for passengers, adding that NIS officials could refuse a passenger from travelling if they were not sure of his mission abroad.

Speaking, NIS spokesman, Mr. James Sunday, explained that it was within the purview of the service to ensure that anyone departing the country had the necessary document that would aid his or her travelling.

He dismissed reports that immigration officials at the airports ask for gratification from the travelling public, adding that  anyone with complete travelling documents should not entertain any fear when approach by its officials.

According to him, “I cannot start to talk on an issue that there is no fact on ground. The fact on the ground is that for anyone that is travelling, I believe by virtue of exposure, one should be able to know the name of the person that is travelling. Also, we have several agencies there that are in mufti and you can’t just attribute anything that happens at the airport to the immigration officers.

He continued, “It is not every time that when you are approached at the airport that it is the immigration that approaches you. It’s is not always true. Much as I can’t say much on the issue, I cannot confirm that our officer is involved in any shady deal at the airport. What I can say is that our officers wherever they are posted to, do their best to hold the integrity of the nation.”

Be the first to comment on "Ease Of Doing Business: NIS Tags Officers’ Counters At Lagos Airport"