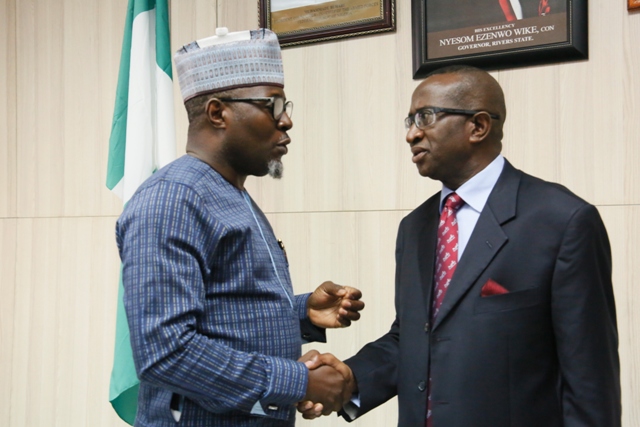 * The Chairman of the Governing Board of the Niger Delta Development Commission, NDDC, Senator Victor Ndoma-Egba (SAN), discussing with the President of the National Association of Nigeria Travel Agencies, NANTA, Mr Bernard Bankole, aftera courtesy visit at the Commission’s Headquarters in Port Harcourt.

Chairman, Board of Directors of Niger Delta Development Commission (NDDC), Senator Ndoma Egba has promised to chair and present the lead paper at the 42nd Annual General Meeting of the National Association of Nigeria Travel Agencies (NANTA), slated for Port-Harcourt in March.

Also in same framework, the presidency through Mr. Femi Adeshina, the Special Adviser Media to President Muhammadu Buhari has thumbed up the game changing initiatives of NANTA to rid the travel trade business of corrupt practitioners, assuring that the federal government will partner with NANTA to create the necessary enabling environment to drive the down-stream of the aviation sector as major player to the sustainable economic and social development of Nigeria.

To the Director-General, National Council for Arts and Culture (NCAC) Otunba Segun Runsewe, NANTA will be rebranded to give new meanings the culture as a business and enabler of rural development.

Senator Ndoma Egba, who received NANTA President and his entourage at NDDC head office in Port-Harcourt last week, promised not only to attend the conference with a theme “symbiotic relationship of Aviation and Tourism – A key to economic sustainability” but also partner with NANTA to drive rural cultural tourism in the Niger Delta areas.

He expressed immense joy and happiness at NANTA visit and acknowledged that NDDC has the mandate to grow rural tourism and help change the ugly narratives of Niger delta people whose history and disposition to hospitality had been distorted through many years of unexplainable restiveness and economic dislocation.

“At NDDC, we want to create militant force of aggressive development, economic empowerment and showcase a culture of hospitality, tourism, arts and crafts noted with hospitable people of Niger Delta areas.”

“We want to see our food, fashion, arts and crafts, unique culture dances exported to the world which in the long run, will help attract investments into our delta areas and also change the sad story of our people mismanaged by unseen forces,” the Senator added.

He called on NANTA President to come back with proposals on how NDDC can partner with NANTA to open up Niger Delta rural areas to tourism economy.

Earlier, NANTA President, Bankole Bernard has informed the NDDC chairman of the notable and game changing strides at NDDC since he became chairman and invited him to share his experience with NANTA members during their conference in Port-Harcourt in March.

Bernard lamented the negative narratives about Niger Delta areas and Port-Harcourt in particular, noting that such stories are exaggerated and vented to rubbish the huge culture and tourism endowments of the people and therefore urged NDDC to partner and support NANTA as destination marketers to tell the real story of the region.

Meanwhile, the Presidency has also assured NANTA of support in its entire endeavour, particularly in projecting the good image of Nigeria as a safe place to invest in tourism and aviation business in Africa.

Femi Adeshina, who received NANTA President and his delegation at the villa, assured NANTA that President Buhari will be briefed about the association’s effort to check fraud in travel trade business in Nigeria and the readiness of the Presidency to encourage the ease of doing business in the downstream sector of the aviation industry.

In same vein, NCAC boss, Otunba Segun Runsewe expressed his agency’s readiness to change the entire conference outlook of NANTA gathering in Port-Harcourt, noting that the culture and tourism industry in Nigeria needs an association like NANTA to occupy the private sector tourism space.

“NCAC will be in Port-Harcourt and we shall unveil a new template of Nigeria’s culture industry never seen before,” he assured NANTA.