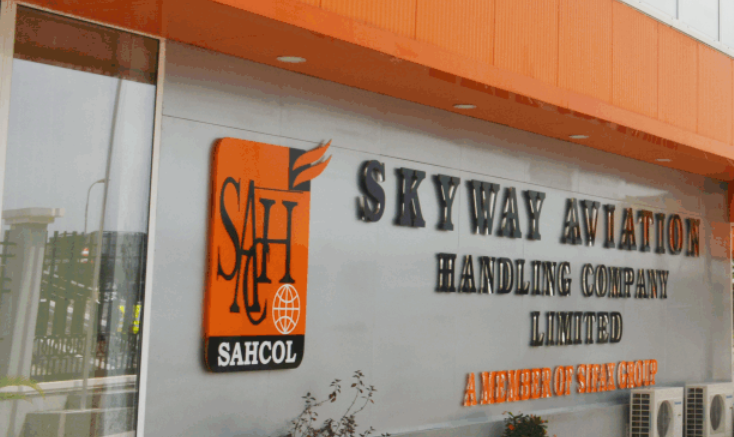 The Bureau of Public Enterprises (BPE) at the weekend stormed the office of the Skyway Aviation Handling Company of Nigeria (SAHCOL) Limited at the Murtala Muhammed Airport (MMA), Lagos over the refusal of the latter to enlist on the floor of the Nigerian Stock Exchange (NSE) as stipulated in the Act of the bureau.

Recalled that SAHCOL, a unit under the defunct national carrier, Nigeria Airways was privatised in 2009, nine years ago and was supposed to have been offered to the public since 2014.

It was learnt that officials of BPE led by the Director of Post Privatisation, BPE, Mr. Ibrahim Chiroma Baba were in SAHCOL on Friday to find out why the company has not be enlisted on the floor of NSE, in line with BPE Act, which stipulated five years for every government organisation that is privatized.Abelnews learnt that the Acting Managing Director, SAHCOL, Mr. Basil Agboarumi led the management team and that both parties held a closed door meeting after the officials of BPE had toured the facilities of the ground handling company taking pictures.

A source, who was privy to the meeting revealed that rather than the 41 per cent expected to be owned by the Chairman of SAHCOL, Mr. Taiwo Afolabi while the remaining 51 per cent goes to the public, it was gathered that the Chairman reached an unclear agreement with BPE to sell only 20 per cent of the shares to the public and the staff while he retains the remaining 80 per cent.

It was not clear if the management of BPE agreed to the proposal, but the source said the proposal may scale through as Afolabi had been visiting BPE regularly in the past six months.

This, it was further leant did not go down well with some management staff, who are of the opinion that the mere 30 per cent proposed to be sold to the public if accented to by BPE would set a bad precedent not just in the industry, but in the country as a whole.

The industry unions; National Union of Air Transport Employees (NUATE) and the Air Transport Senior Staff Services Association of Nigeria (ATSSSAN), who in the past were part of the meeting with the BPE, were not invited when the BPE visited.

“We already suspect shady deals in whatever the BPE is having with the current management of SAHCOL. First, the unions who were part of the privatisation process of the company were not informed of the coming of the BPE officials even when they have always been a part of their meeting in the past.The Chairman has been going to BPE in Abuja for months now, trying to tell them while the company could not be enlisted on the stock exchange nine years later,” the source said

The source continued, “The Act of BPE stipulates that any government company that is privatised must be enlisted on the stock exchange five years later. That was what happened in the Nigerian Aviation Handling Company (NAHCO) Plc, which was went to the stock within five years of privatisation, I don’t know why ours is different. The selling of just 20 per cent to the public doesn’t change anything. It’s a continuation of the old order. Mind you, there is even a way that they can manipulate the 20 per cent, which goes to the public and ensure that their cronies still get a large share from it.”

Abelnews recalled that the Director-General of BPE, Alex Okoh had visited SAHCOL in December 2017 for on-the-spot information on the processes of enlistment on the stock exchange by the management.

At the meeting , the unions was said to he unions at the meeting had insisted that the company should be privatised, but that two months later, BPE is yet to act on the process that would lead to enlistment on the stock.

The ground handling company image maker Mr. Basil Agboarumi, confirmed the visit of BPE but that the management was waiting for BPE to come up with modalities for the company to be enlisted into NSE.

According to him, “The BPE came in to come and see if the time has come for them to sign up and in signing up means we have to shed a percentage of the share to the public. The ball is now in their court.”

On the percentage of shares to be sold, he said, “All I know is that certain percentage would be made to the market. It has to do with the final thoughts between BPE and the investors that would finally tell the direction that we are going but I know that at the end of the day, it will continue to be better. You will agree with me that there is already a success on our part and we are working seriously to do more to make the place even much better and that is what we are doing.

“It now depends on what is on the book. Whatever the book could have said, I still believe that for now we have it 100 percentage which was part of the agreement,” he added.