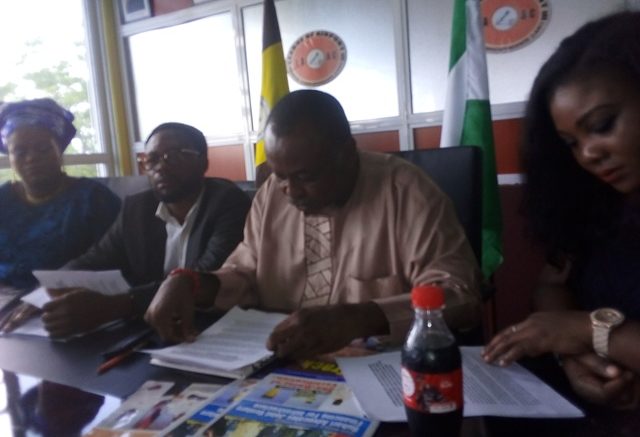 A coalition of Market Youth Congress of Nigeria, Igbo Traders Support Group on Good Governance and Yoruba Women Trader Support Group have said that the achievements of the Minister State, Aviation , Senator Hadi Sirika within two years justifies the clamor for the re-election of President Muhammadu Buhari.

The coalition said this at media conference at the Murtala Muhammed Airport (MMA), Lagos today.

A statement read by the group’s National Coordinator, Chief Victor Amadi stated that the conference was not to highlight the achievements of President Buhari but to celebrate some of the achievements of Minister of State for Aviation, Senator Hadi Sirika

According to him, “The purpose of this conference is not necessarily to highlight the achievements of President Buhari’s administration rather we have come to celebrate some of the numerous achievement of the Honourable Minister of State for Aviation Senator Hadi Sirika in the Aviation sector, we urge all Nigerians mostly people from the south east, south west and south-south to support the re-election of President Muhammadu Buhari in 2019.”

He continued, “We want to use this opportunity to congratulate him and the President of the Federal Republic of Nigeria, Muhammadu Buhari and the ruling All Progressive Congress (APC). We wish to note that the effort of the Minister justifies the clamour for the re-election of President Buhari under this great party so that the country will continue to be blessed with highly intelligent and gifted leaders like Senator Hadi Sirika.”

He cited the repair of the Nnamdi Azkiwe Airport(NAA), Abuja within a stipulated time and the diversion of flights to the Kaduna Airport ,

He stated that when the Buhari administration took office the new terminals at the five international airports in Lagos, Abuja, Port Harcourt, Kano and Enugu were practically abandoned but that work at these airports was revived and that today the projects are at advance level of completion, adding that before the end of this year they would be put to service.

To further buttress the group’s point, Amadi added that for the time in the history of Nigeria, the two busiest airports in country in Lagos and Abuja were certified to the International Civil Aviation Organisation (ICAO) standard and this means that these airports are recognised worldwide as meeting all standards for international flight operations.

Speaking on the insecurity in the Niger Delta, the coalition, said, “The incessant attacks on oil and gas pipe lines by the militants in the Niger Delta has also been drastically reduced and government is having discussions with major stake holders in the region towards finding lasting solution and total restoration of peace within the region.

The agitation for separation by some people from the South East region, he said has also been completely eliminated and that government has started addressing the infrastructural degradation it met in the area when it came to power in 2015, which of course was not caused by Buhari’s Administration.

He mention some of the projects , the current administration has embarked on to include: the second Niger Bridge, which has been on the drawing board over a decade is now witnessing massive construction, the Enugu, Aba, Port Harcourt expressway as well as the Onitsha, Enugu expressway, which according to him have started witnessing serious reconstruction by very reputable contracting firm under the leadership of President Muhammad Buhari

He said that the major commercial cities in the South East region have been included in the modern rail construction project of this administration supervised by the Minister of Transport and Aviation. Hon. Chibuike Rotimi Ameachi and that more other infrastructural development are already slated for the South East region in the nearest future.

Be the first to comment on "Group Commends Sirika’s Achievements, Clamours For 2nd Term For Buhari"