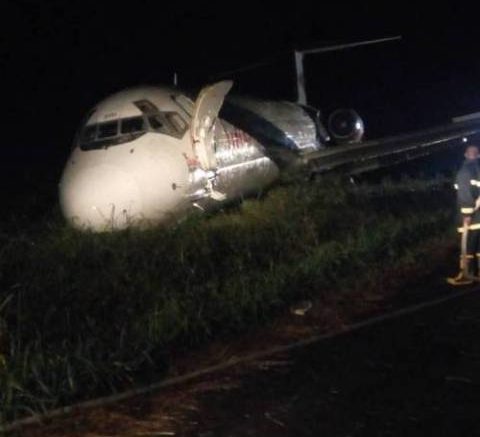 The Accident Investigation Bureau(AIB), the agency saddled with the responsibility of investigating both air incidents and accidents in the aviation sector has stated that it had commenced investigation on the Dana Air aircraft ;MD 83,with registration number 5N-SRI and Flight Number: 0348 that skidded off the Port Harcourt Airport runway on Tuesday.This was disclosed to Abelnews by the AIB, Spokesman Mr Tunji Oketunbi, while fielding question on whether Dana Air has notified the accident investigating body of the serious incident.

Recalled that AIB had accused Delta Air Lines that lost one of its engines seven minutes after takeoff from the international wing of the Murtala Muhammed Airport (MMA), Lagos few days ago for not notifying the agency 17 hours after the serious incident occurred in accordance with the rules.

The airline later apologised to AIB for its action.

Speaking on Dana Air’s case , the AIB image maker stated that the airline had since notified AIB and that investigation had commenced.He explained that already a team of AIB investigators were in Port Harcourt and had since commenced investigation to unravel the cause of the serious incident.

Oketunbi added that the leader of the AIB investigators is the agency’s Director of Operations, Capt. Dayyabu Danraka .