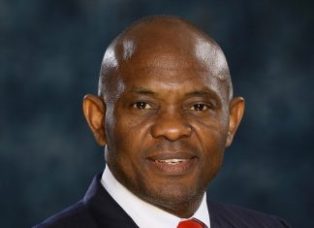 The Chairman of United Bank of Africa Plc (UBA),Mr Tony Oyemaechi Elumelu, who is also the founder of the Tony  Elumelu Foundation has instituted a civil action against a  Publisher,  Mr Uju Onyechere at the  Federal High Court, Lagos for allegedly passing off a book entitled “Tony Elumelu Straight From The Guts.”

According to an  affidavit filed and sworn to by a legal practitioner Mr Osinowo Kolawole by the law firm of Tokunbo Orimobi the deponent averred that, over the years Mr Tony Elumelu through doggedness and hard work had acquired substantial reputation with the name “Tony  Elumelu ” in connection with his person and brand as the name has become well known in the Nigerian and Global banking and finance industry.

Apart from being the founder of Tony Elumelu Foundation, he is also respected in high esteem in the following capacities, the Chairman of Transnational Corporation of Nigeria Plc, (TNC),Chairman Heirs Holding Limited, a foremost Nigerian Economist, a Philanthropist an Entrepreneur and an Author.

The deponent averred that sometimes in October, 2017, it came to the plaintiff’s attention via anonymous tip that Divine Care Pharmaceutical Limited was displaying and offering for sale to the general public a book entitled “Tony Elumelu Straight From The  Guts ” with International  Standard Book Number 978 978 917 108-8 at its office number 32, Enitan Street, Aguda Surulere Lagos State.

Mr Kolawole averred further that Tony Elunelu is not the Author, Publisher or a distributor of the said offending book and neither is anyone, including any of the defendants herein or any other person, natural or incorporated entity, authorised, permitted or licensed to author, publish,sell or offer for sale any such book.

Being seriously perturbed and concerned about the existence of the said offending book, as same constitutes an infringement of the plaintiff ‘s brand, trade Mark, name and goodwill, he detailed some people to investigate same at Fabian Chima Eni ‘s place of business. However, by the time the plaintiff’s representatives arrived at his premises, most copies of the book had been sold off,but a copy of the book being offered for sale was purchased from the office of Divine Care Pharmaceutical Limited.

The defendants were alleged to have deliberately published and continued retailing the book and have been benefiting undeservedly from passing off the name, goodwill and reputation of the plaintiff, which have been built over the past 20 years from his personal and professional sojourn.

By the reason of the action of the defendants without the consent of the plaintiff, there has been great confusion on the general public as to the authorship of the book.

The defendants, by way of the offending book and in a design to confuse the general public with regards to the authorship of same, represented at various pages of the book with the clear intention to confuse and achieve their aim of passing off the said book as the plaintiff’s created an impression that Mr Tony Elumelu sanction the publication with his name with quotes ascribe to it.

In view of the foregoing, the plaintiff is seeking for the order of the court restraining the defendants and their agents, from distributing, advertising, selling, offering or displaying for sale, or otherwise howsoever merchandising the book entitled Tony Elumrlu Straight The Guts” at any location in Nigeria.

The Presiding judge, Babs Kiewumi has adjourned till March 13, 2018,for the hearing of the substantive suit.

Be the first to comment on "UBA Chairman, Tony Elunelu, Sues Publisher, Two Others Over Passing Off"