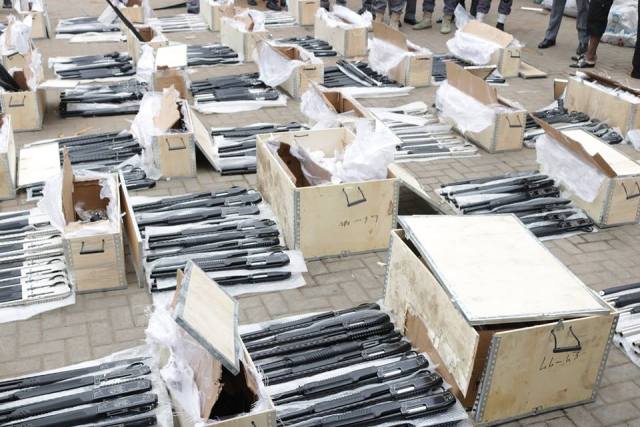 Mamudu Hassan, one of the accused persons standing trial over unlawful importation of 661 sophisticated pump action guns into the country, last year December, yesterday told a Federal High Court, that he paid a sum of N1 million to officials of Department of State Security (DSS) and other security agencies to smuggled the guns out of Apapa Port.

Mamudu, a retired an Assistant Comptroller of Customs, stated this in a recorded video during his interrogation by the men of the DSS.

The video recorded on March 27, 2017, between the hours of 2 p. m. and 2.45 p.m., which was tendered by an operative of DSS, Jaiye Emmanuel, during a trial-within-trial, Mamudu while analysing how the N1 million was shared among DSS and other security agencies said, “I gave N1 million to facilitate the moving of the container out of court, but it is not because of the guns”.

It would be recalled that the Nigeria Customs Service had on June 14, 2017, arraigned two Customs Office, Muhmud Hassan and Salisu Abdulahi Danjuma, alongside Oscar Orkafor, Donatus Ezebunwa Achinulo and Matthew Okoye, before Justice Ayotunde Faji’s court, on charge bordering on illegal importation of fire arms, conspiracy, forgery and altering of documents, offering of graft to government officials and importation of prohibited goods.

AGF in charge number FHC/L/190c/17, alleged that all the accused persons conspired with one another to illegally import into Nigeria 661 Pump Action Rifles.

They were also alleged to have forged the documents which includes: two Bill of Ladings, one reads ‘Shanghai China’, as Port of Loading, instead of ‘Istanbul’, and another one which reads: ‘Steel Doors’, as the contents of the container instead oIm Customs’ Form M, Pre-Arrival Assessment Report (PAAR) used in smuggling the the said 661 rifles Into the country.

In particular, the one of the Customs Officials, Mahmud Hassan, was alleged to corruptly offered the sum of N400, 000.00, to one Aliu Musa, the Examination Officer of the Federal Operation Unit of the Customs Service with an intent to prevent 100 per cent search on a container marked PONU 825914/3, which was used in bringing into the country the said arms.

He was also alleged to have corruptly gave the sum of N1 million to Government officials at Apapa Port, through his colleague, Danjuma Abdulahi, to prevent the searching of the said container used in bringing in the 661 illegally imported Pump Action rifles.

Be the first to comment on "Illegal Arms Importation: I Paid SSS, Others N1M To Smuggled Container Out Of Port—Accused"