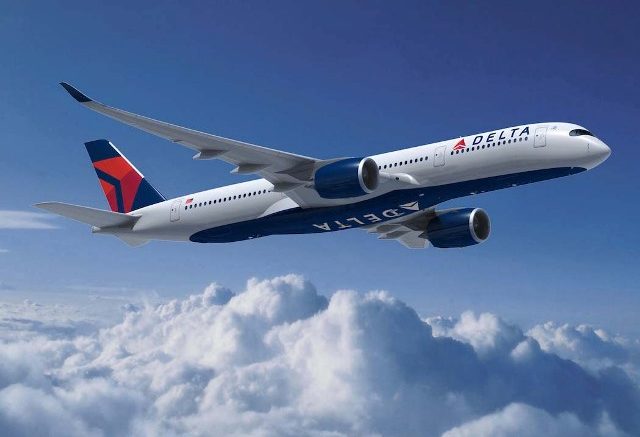 * Artist rendering of a Delta-branded Airbus A350

A United State bound Delta Air Lines flight that took off from the international wing of the Murtala Muhammed Airport (MMA) Lagos at about 10: 45 pm made an air return to the airport minutes after it took off.

Abelnewsng.com learnt that the flight DL 055(ATL) with registration number N858NW got in touch with Lagos Control Tower following signals in the cockpit that the airplane has lost an engine

Following the request by the pilots for emergency landing, the LAGOS Airport emergency team was activated and the Atlanta bound aircraft landed safely and passengers were immediately evacuated.

Abelnewsng.com however learnt that some of the passengers sustained injuries in the process of evacuation

Delta Air Lines confirmed the incident in an online statement made available this morning.

According to it, “Delta flight 55 from Lagos, Nigeria to Atlanta returned to Lagos International Airport Tuesday after an issue with one of the A330-200’s two engines. The flight landed safely and customers exited the aircraft on the runway via emergency slides. Airport fire authorities met the aircraft upon arrival. Delta’s customers were bussed back to the terminal. Delta is aware of five customers reporting non-critical injuries as a result of the evacuation.”

It continued, “Delta teams have provided overnight hotel accommodations to customers and will rebook customers on an alternate Delta aircraft Wednesday afternoon. The safety of Delta’s customers and crew members is always our top priority.”

Meanwhile, abelnewsng.com stumbled on a special report titled Air Return/Emergency Landing and Cancellation of the Delta Air flight” reads, “The flight which initially pushed back at 22:40hrs had Air Return /Emergency landing at 23:16hrs, when the pilot in command (PIC) announced the evacuation of all the passengers on board within 90 seconds, after contacting the Control Towers because the left engine of the aircraft was said to have caught Fire mid air in-flight.”

“ Although there is no death recorded as at filing this report but quite a number of crew and passenger casualties were recorded and have been taken to Lagos State University Teaching Hospital (LASUTH) Ikeja, Nigerian Air Force Base Clinic, and (FAAN)  Medical Centre, for speedy medical attention”. the special report said.

Be the first to comment on "US Bound Delta Air Lines Aircraft Losses One Engine, Makes Air Return"