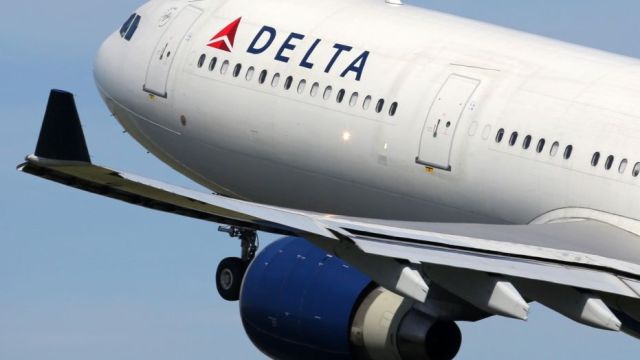 The management of Delta Air Lines has said that another Delta aircraft has arrived the international wing of the Murtala Muhammed Airport (MMA), Lagos from Hartsfield-Jackson Atlanta International Airport to airlift Nigerian passengers, whose flight was aborted to the United States tonight.

Recalled that the US bound aircraft A330-200 series with registration N858 NW with 219 passengers, that departed at 21.52 UTC (9.52 pm) local made emergency landing at the international wing of the Murtala Muhammed Airport (MMA), Lagos at 21.59( 9..59pm)local time  seven minutes after takeoff.

A statement issued by the airline said that Delta flight 55 from Lagos, Nigeria to Atlanta returned to Lagos International Airport Tuesday after an issue with one of the A330-200’s two engines. The flight landed safely and customers exited the aircraft on the runway via emergency slides. Airport fire authorities met the aircraft upon arrival. Delta’s customers were bussed back to the terminal.”

Delta, the airline, said is aware of five customers reporting non-critical injuries as a result of the evacuation, adding that Delta teams have provided overnight hotel accommodations to customers and will rebook customers on an alternate Delta aircraft Wednesday afternoon.

The statement added that the safety of Delta’s customers and crew members is always its top priority.

“The airline can also confirm that in the early hours of Thursday, 15th February 2018, another Delta Air Lines aircraft will arrive Lagos Airport to airlift more Nigerians to the US same day,” the management added

Be the first to comment on "Aftermath Of Incident: Delta Begins Airlift Of Nigerian Passengers Tonight"