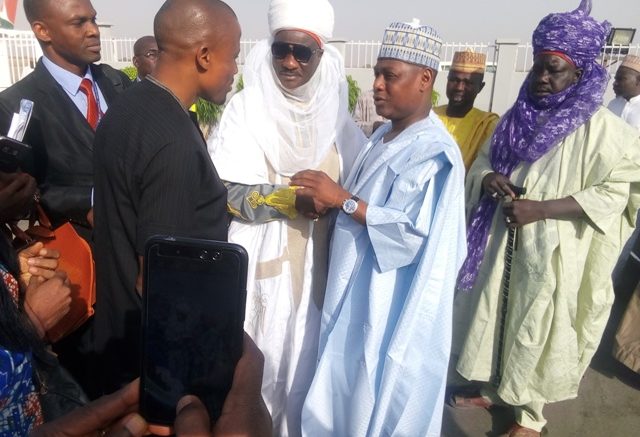 *From L to R , the General Manger , Corporate Communications, Mr Chris Iwarah, the representative of the Emir of Kano, Jakadan Hausa, Alhaji Ibrahim Sambo and the Chairman of IRS Airlines , Alhaji Rabiu Isiaku Rabiu during the inaugural flight of Air Peace to Kano at the Mallam Aminu Kano Airport today

The Emir of Kano, Alhaji Muhammed Sanusi has stated that the Emirate would continue to support Air Peace to succeed on the Lagos–Kano route.

This is just as he advised the airline not to delay its passengers but to ensure it sustain his operation with good service at all times.

The Emir, who was represented by Jakadan Hausa, Alhaji Ibrahim Sambo spoke at a brief ceremony to mark the inaugural flight of Air Peace airline into Kano.

He stated that there a very few airlines operating into Kano, adding that now that Air Peace is here , the people of Kano are very happy.

According to him, “All the necessary support will be given to Air Peace to succeed. When Air Peace came to express its interest to fly to Kano, we made it a matter of importance to give them accommodation. We hope you will have affordable fare and also sustain this route. Speaking at the event, the Chairman of Air Peace, Mr Allen Onyema stated that the launch to Kano was a significant milestone in the Airline’s vision to unite Nigeria through air travel and lift the nation’s economy through trade facilitation and massive job creation.

According to Onyema, “Today’s historic event accords with our strategy to expand our operation in the North of Nigeria and connect other un-served or under-served cities of the nation. Kano has long been recognised as the economic capital of the Northern Nigeria. We are therefore hopeful that the extension of our flight services to the state will greatly and positively impact on the economy of the region.”

Onyema disclosed that the Kano launch would be followed with the commencement of flight operations to Yola in Adamawa State on February 15, and Freetown, Banjul, Dakar on February 19.

He added that last year, the airline hugely expanded its capacity to serve the flying public with the increase of its fleet to size of 24 airplanes.

The Air Peace Chairman also said that on January 31 and February 8 the airline took delivery of two of the six Embraer 145 aircraft it recently acquired to serve cities with air transport difficulties under its new subsidiary, Airy Peace Hoper.

The airline, he stated is more positioned to transform air travel experience in Nigeria, West Africa sub region and beyond. In his words, “We are reputed for our time performance and uncompromising stand on matters of safety. We promise to leverage the experience of our skilled staff and excellent business model to end the era of endless delays on the Lagos–Kano-Lagos and Kano -Abuja-Kano routes.”

He appealed for patronage and support as the airline operate twice daily from Lagos into Kano and back, once from Kano into Abuja and back and try to deliver a whole new extinction the Kano route.

“We are determined to forge a mutually beneficial relationship with the good people and residents of Kano and its neighbouring states,” Onyema assured.

On his part, the Regional Manager, Alhaji Muhammad Bello said that immediately the airline showed interest of flying into Kano.

He assured the airline of the agency’s support and hope that the airline would sustain the flight on the route.

Be the first to comment on "(Updated)Emir Sanusi Assures Air Peace Of Support, As Airline Begins Flight Operations To Kano"