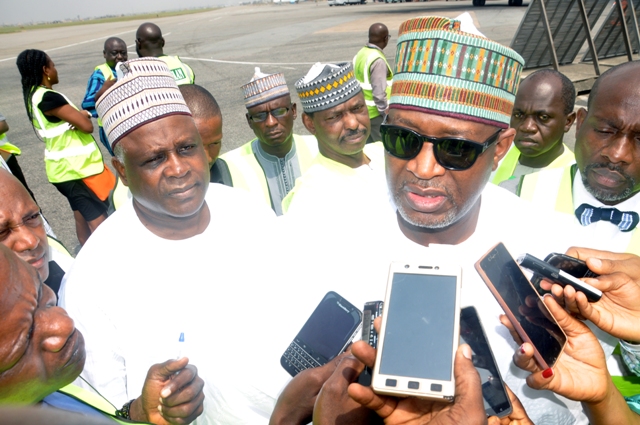 …Says Nigeria At Vantage Position To Benefit From SAATM

…Asks Local Airlines To Put Their Acts Together

…Says We Are Investigating

The Minister of State, Aviation, Senator Hadi Sirika has stated that transaction advisors for the concession of Airports have brought in the outline business case and that it was currently being studied.

He said this while speaking with aviation correspondents at the airside of the Murtala Muhammed Airport(MMA),Lagos today.

According to him, “The transaction advisors for the concession have brought in the outline business case. We are studying it and we are going to do our full business case and it would happen so soon. “

Speaking on the Single African Air Transport Market(SAATM), which has been embraced by the continent and its benefits, the Minister stated that Nigeria was among the first 11 countries in African to endorse the of the liberalisation of the aviation market in  Africa, adding that what this means is more connectivity and jobs among other benefits.

According to him, “Nigeria is among the first 11 countries that went to Yamoussoukro and took a decision to liberalize the sector and open the sky for Africa and this means growth. This means development. This means more jobs. This means more security and this means more connectivity. This means more passenger experience and comfort. Now arising from that and Nigeria being a signatory to that, the Single African Air Transport Market became the issue and Nigeria also joined to become the first 23 countries to make that solemn declaration on Single African Air Transport Market (SAATM) and I think Nigeria with population of 173million people, half the size of West Africa, would be the greatest beneficiary to this.”

The Minister, who also spoke on the long awaited national carrier, said, “At the time Nigeria was pushing for this you and I know we had Nigeria Airways and we thought we would take advantage of it. Now we don’t and our airlines for one reason or another have not grown to that capacity and this is why the government felt that we should set in motion to create a robust carrier that would take advantage of this SAATM for the benefit of the Nigerian people. “

He stated that the government was on the right course as it concerns national carrier and that he believes that this private sector led and driven airline once established would become the dominant carrier in Africa because the market is Nigeria’s.

According to him Nigeria’s centrality to Africa, by its geography is god- given. And with the market of 173million people, this is a large population and Nigeria travels almost for nothing. So if you talk of advantage, Nigeria is at vantage position to take advantage of this SAATM. “

He added that as soon as it was signed the implementation begins but it would take between one to two years before it becomes fully functional and operatable.

On the Bilateral Air Service Agreements (BASAs) that was skewed against the interest of Nigeria?, the Minister, “We will continue to sign this BASAs up to a time that Nigeria would take full advantage of the BASAs themselves and we cannot sign a BASA that would be skewed against Nigeria. It cannot happen.”

Speaking further, he advised local airlines to put their acts together and take advantage of SAATM.

“If I will advice them, they should get their Acts together to focus to re-organise, to re-engineer and take advantage and be futuristic and looking at the bigger future and organise themselves and take advantage of the SAATM rather than to sit there and the train is moving and begin to whine.

He disclosed that there is an airline that owes one of the agencies N13billion and another N500billion.

In his words, “I think it is getting their priority right and doing the business model that would bring money for them. Everybody wants to run into scheduled passenger flights. There is a lot they can do in aviation.”

Sirika pointed out that under this administration, he would not allow them to continue to pile debt and go to the villa and the debts are either waived off or the debts are post- dated, adding that no villa will call any airline.

On the recent incident on Dana flight, he said, “It is very quite traumatizing for an air traveler after landing to see an emergency door falling inside the aircraft. It can be very traumatizing, very uncomfortable and very scary. We reason with them. We agree it is so. We apologize for the mishap but I want to just explain to those who are non-aviators that because of the way aircraft are built, of that size and of that kind of operations, the aircraft are pressurized and by pressurizing the cabin of the aircraft will force those doors to remain closed in flight at altitude. That’s why the emergency door did not fall in the sky. “

On the issue of Lufthansa Consortium, Sirika explained that “part of what the required from us for the national carrier was that they wouldn’t be charged any taxes which is against our law. “

Be the first to comment on "Airport Concession: Sirika Confirms Submission Of Outline Business Case By Transaction Advisors"