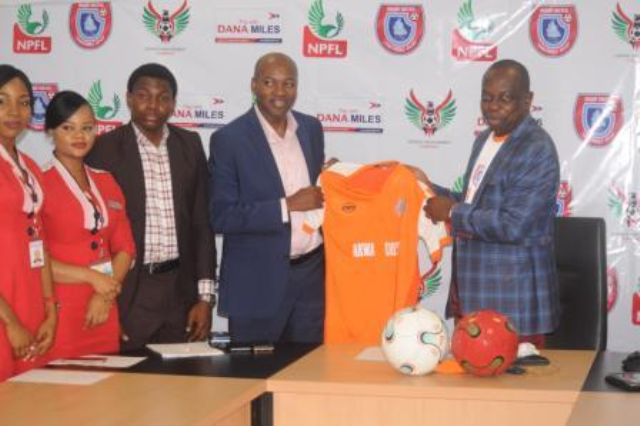 As part of its commitment towards sports development in Nigeria and making the Nigerian Professional Football League more glamorous, Dana Air today unveiled another sponsorship deal worth millions  of Naira with the current NPFL league leaders Akwa United FC of Akwa Ibom State.

Under this deal, Dana Air will get branding opportunities for the duration of the season and fly the team to all its away matches in the 2018 NPFL season.

Also as part of the deal, the club’s player of the month initiative will be sponsored by Dana Air with a very good largess from the airline.

Speaking at the press conference to announce the deal, the Accountable Manager of Dana Air said, ‘let me first congratulate Akwa United for winning the league cup last year and for starting this season on a very impressive note.’’

“Just like I said when we also unveiled our sponsorship for Heartland FC of Owerri, it’s not all about the branding opportunities or commercials, but our commitment to developing football in Nigeria and supporting the Nigerian league. It about making our league glamorous and encouraging the players to be the best. If we bring the passion with which we follow the teams in the EPL our league will be better for it. We have taken the lead, and we hope other corporate bodies will look in that direction.’’

Also speaking at the ceremony, the Chairman of Akwa United, Elder Paul Bassey said ‘this is surely a turning point in the development of football in Nigeria. This partnership will definitely ease our travels and we commend Dana Air, Nigeria’s foremost airline for this.’’ Air travel is the safest in the world and with this, Dana Air has taken a lot of burden off the club. The other day, we heard of a team that was involved in a road mishap, thank God the players came out unhurt. We thank Dana Air for giving back to the society and supporting Akwa Ibom state.  Dana Air will surely get the value for this sponsorship, ’’he added

Only recently, Dana Air unveiled a mouth-watering sponsorship deal to support the 2018 NPFL campaign of Heartland FC of Owerri.

The airline is the first and only domestic airline to have taken such initiative just as other global carriers like Emirate, Ethiad and Qatar airways.

Dana Air, a member of the International Air Transport Association (IATA), operates over 27 daily flights from Lagos to Abuja, Port Harcourt, Uyo, and Owerri. The airline is reputed for its innovative online products, World-class in-flight service and unrivaled on-time performance