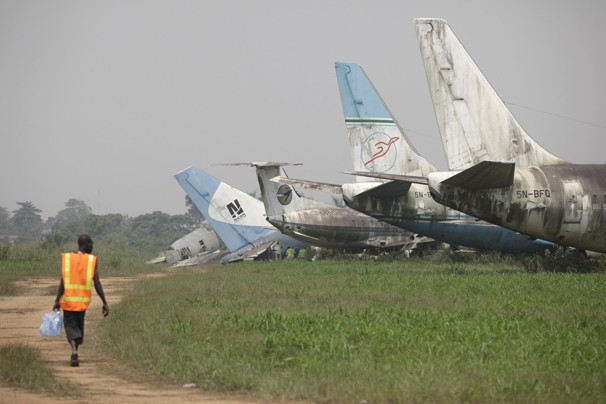 …To Install CCTV At Strategic Locations Within Airside

The Federal Airports Authority of Nigeria (FAAN) said it has started evacuating abandoned aircraft at the airside of the Murtala Muhammed Airport (MMA), Lagos.

This is just as the agency stated that plans had also reached an advanced stage to install Closed Circuit Television (CCTV) cameras at the strategic locations within the airside to forestall aircraft poaching and other incidences.

No fewer than 13 airplanes belonging to different airlines have been abandoned at the airside of the airport for several years, as the owners have refused to relocate them despite several warnings issued to them by the agency.

She explained that at least 13 aircraft have been abandoned at the airside by different airlines for many years.

Speaking further, the FAAN spokeswoman explained that the agency had told the owners of these aircraft severally to relocate them away from where they are presently abandoned without any fruitful response from them,

She stressed that where they are presently abandoned constitute danger to safety and smooth operations of aircraft.

She revealed that so far four of the abandoned aircraft were relocated last Friday while additional four would be moved today; Monday.

She gave the names of the aircraft relocated last week Friday by the agency to include: Associated Air, IRS, Dana Air and Hak Air.

Yakubu gave the names of abandoned airplanes to be removed today as aircraft belonging to Air Nigeria, Associated Cargo, Bellview, JedAir, Precision Aviation Handling Company and PAC, TopBrass and others.

She said the relocation became necessary to give more space for airworthy aircraft to land, take off and manoeuvre as expected during operations at the airside, adding that FAAN would continue to take safety and comfort of airport users as a top priority.

According to her, “As at Friday, we moved four aircraft from the airside and the General Aviation Terminal (GAT) of Lagos airport told me again this morning (yesterday) that they are going to move another set of four aircraft. We have about 13 aircraft abandoned at the airside. We have taken the legal issues into consideration, if you agree with me; these aircraft are not helping us in anyway. They are taking up a lot of space. Space for aircraft landing and taking off are being taken by these aircraft.

She continued, “The airports belong to FAAN, which means that it is the property of the Federal Government and there is no airline that is bigger than Nigeria. Nigeria has given them a long time to be able to move their aircraft and they have refused to do this. FAAN is not taking possession of their aircraft, but we are moving them away from where they are to another place within the airport where they will not serve as eyesore and where they will not constitute nuisance to activities on our airside.

Speaking further she said, “What we are doing is part of the services FAAN is providing; comfort and security. So, for security, these aircraft have been abandoned at the airport for long and miscreants can just go in there and do whatever they want. We want our airports to look beautiful and fine, the aircraft that are littered around, it defaces the beauty of our airside.”

Meanwhile, Yakubu also disclosed that very soon, FAAN would procure and install CCTV cameras at strategic places within the airside to further improve security at that part of the airport.

She stated that apart from this FAAN had embarked on grass cutting at the airside to ensure improved safety and prevention of security within that area of airport.

In her words, “What we had in the past was that the ‘Follow Me’ vehicle used to be in the front of aircraft, but we have decided to reverse the order. The vehicles are now at the back of the aircraft to ensure that the aircraft go to parking bay without any incident or aircraft poaching.”

Be the first to comment on "FAAN Begins Evacuation Of Dead Aircraft Belonging To JedAir, Bellview, TopBrass, Others At Lagos Airport"