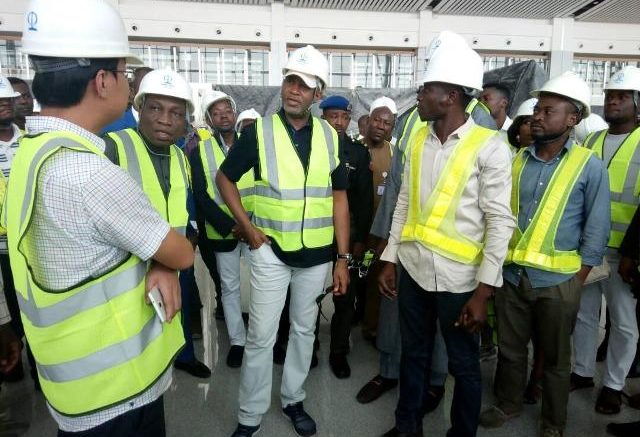 Barring any last minutes appeal, the Federal Government through the Minister of State for Aviation, Senator Hadi Sirika may terminate the contract for the construction of the Port Harcourt domestic terminal  handled by , Inter-Bua Construction Limited over the snail speed at which it was handling the project.

The Minister, who was very angry at the pace of work by the contractor, stated this during a working visit to the airport to inspect ongoing projects and state of facilities at the airport,

Speaking  on the project, Sirika expressed dissatisfaction with the conduct of  Inter-Bua Construction Limited, adding that the construction of the terminal was taken too long.

“Unfortunately, this particular procurement started in 2011 and the contractor moved to site in 2012. Since then,  he has taken his own speed the way he seems fit to do so and he has been indulged. He  even changed the scope of work without approval and subsequently he went to the previous government and got approval to that effect. When we came in, we had no option than to continue since he had a legitimate extension and expansion approval from the then government.”

He continued, “Since government is continuum, we decided as a government to finish it in line with the thinking of President Muhammadu Buhari to complete all ongoing projects rather than create new ones.”

Port Harcourt, he stated was very important to the Nigerian economy hence the government was very keen on completing the project due to the current hardship being faced by travelers. Lamenting over the pace of work, Sirika said, “I am disappointed with his slow pace of work and services. As the minister of state for aviation, I have invited him severally to my office to read him all the riot acts that I know how to. We have given him timelines and he has not adhered to those timelines and I am constrained to take a drastic action once I leave here. I believe he had all the time to finish and deliver this project. What is sad is that apparently at the time I came, I found out that he had a lot of materials on site that can take him to the finish and I don’t understand what on earth is stopping him.”

“Even having paid him and agreeing with him in writing that there will not be any more variation  , he has turned around to do the project the way he wants to do it.”

“This is a contract; it has its clauses that can be invoked. It is a contract between two parties. If he is not doing his part of the bargain we will definitely invoke that contractual provision. We are serious minded people and I don’t think we will tolerate this. I am extremely angry and unhappy and I will deal with him legally and contractually because this project must be delivered on time,” he declared.

Meanwhile, Sirika, stated that the New Port-Harcourt International Terminal would be completed in July.

The Minister, expressed satisfaction with the pace of construction at the international terminal constructed by the China Civil Engineering Construction Corporation (CCECC) Nigeria Limited.

According to him, “This is a normal routine visit for inspection of the projects we have been executing over time by the government. This is a very important project for government and we are here to see the progress of work and to see whether they are working according to time lines, according to budget, according to specifications and according to what is approved for this procurement.”

“We are also here to see if there are any challenges that are genuine and need the attention of government. This is a working trip to ensure that everything is okay and that the project will be delivered to the people.”

The minister said the project was about 80 per cent completed and that the incumbent government met it below 30 per cent.

In his words, “It is our hope that by July this year we will deliver this airport despite some of the planning challenges and despite some of the errors we have identified in the past. Since government is continuum, we will ensure that we right the wrongs and get it delivered to the people as efficient as we can and  as safely as we can. Despite the challenges, you can see that the contractor is working hard, as well as the consultant and engineer’s representatives. They are all on site trying to deliver this project.”

Sirika pointed out that the major challenge is water and power supply, stressing that the government would explore the option of Independent Power Project (IPP) to the terminal.

He also noted that the over one kilometre distance between the new terminal and the old one was another challenge that needs to be addressed.

“We have just addressed the power problem in Abuja and we will address that of Port Harcourt before it is delivered. We will also address the water challenge as well. To connect both terminals, we may initially use shuttle buses but government is also thinking of constructing light rail. We want to assure the public and the users of this airport that we will find the best option that will give them maximum comfort, efficiency and security,” Sirika said.