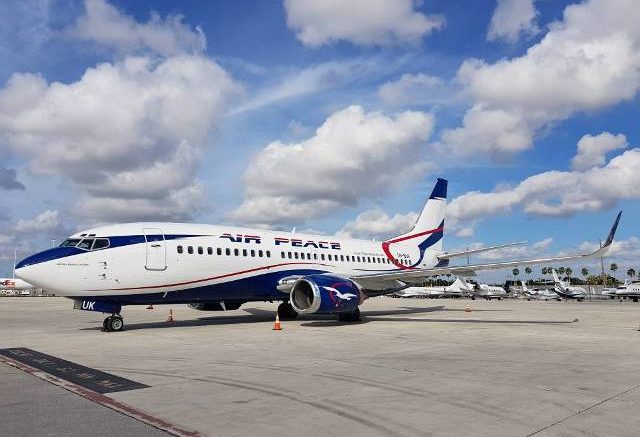 Nigeria’s leading airline, Air Peace has fixed  a new date for the launch of its flights from Lagos to Freetown in Sierra Leone, Banjul in the Gambia and Dakar in Senegal.

The airline said it will now connect the three West Coast destinations on February 19.

Recalled that the airline had fixed the launch of its flights to Freetown, Banjul and Dakar for December 15, 2017.

The launch was, however, suspended at the last minute due to the industrial unrest by air traffic control (ATC) in Dakar.

The carrier had pledged to announce a new date for the launch when it was certain that the industrial action in Dakar, a critical connection in its route plan, had been fully resolved to avoid its guests being put through a strain.

The routes, the statement said, were part of the second phase of the airline’s expansion project on the West Coast of Africa and would bring its network to a total of 14 destinations.

Air Peace, which recently embarked on a project to increase its fleet size to 24 aircraft, said its Freetown, Banjul and Dakar routes would be serviced by its Boeing 737 aircraft to guarantee the comfort of its guests.

“We are pleased that after the unfortunate suspension of the launch of our Freetown, Banjul and Dakar services fixed for December 15, 2017 due to the industrial action by air traffic control in Dakar, we can confirm that our inaugural flights to the three destinations will now take place on January 19, 2018. The new routes constitute the second phase of the expansion of our network on the West Coast of Africa. This is an exciting step in fulfilling our promise to unlock the economies of the region, offer air travellers on business and leisure trips seamless connectivity as well as create jobs for the people when we launched our first flight out of Nigeria into Accra, Ghana on February 16”, Air Peace said.

“We will operate round-trip flights from our Lagos base to the new routes four times a week on Mondays, Wednesdays, Fridays and Sundays. The service departs the Murtala Muhammed International Airport for Freetown at 7am (local time). The launch will bring destinations on our regional route map to four. Our West Coast expansion project isstill unveiling. We hope to connect about five more routes in the region in the next few weeks. In the coming months, we will open up more opportunities for our guests to experience the exciting world of Africa and international destinations, including Dubai, London, Guangzhou-China, Houston, Mumbai and South Africa,” it added.

The airline commended its customers for showing understanding in the postponement of the launch, assuring that its entry into Freetown, Banjul and Dakar would end their travel nightmare on the routes.

Be the first to comment on "Air Peace Re-Scheduled Freetown, Banjul, Dakar Launch For Feb. 19"