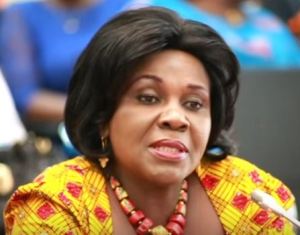 Ghana’s Minister of Aviation, Mrs. Cecelia Dapaah has lambasted officials of British Airways over what she says is their poor treatment of Ghanaian passengers, despite enjoying monopoly over the Ghana-UK direct flight market for many years.

At an emergency meeting with some officials of the British Airways, convened at the Ministry on Thursday, Dapaah, raised four key issues of concern to the Ministry on the airline’s treatment of Ghana and Ghanaian passengers; particularly reports of bedbugs on a flight scheduled to have been flown to Ghana last weekend.

According to her, “It is very disheartening that British Airways that has had a clear monopoly of direct flights to London will treat Ghanaian this way; it is unacceptable, and we demand serious explanations and we need to have your reassurance that this incidence will never ever occur.”

She said for BA’s own staff to walk away from the aircraft after discovering the bedbugs meant they knew the impact of the bugs.

“We know the medical consequences and this is not good enough. We want to register our great displeasure at this incident,” she said.

She stated that Ghana would no longer tolerate such bad treatment from any airline, especially not from British Airways.

The Minister said President Akufo-Addo was very worried about this and they need to reassure that this will never happen again.

“It is not good enough and we want to register our displeasure,” she reiterated.

Dapaah also raised concerns of the overall bad treatment of Ghanaian passengers, including a recent incidence involving the Attorney General, for which the airline had written to apologise.

She stated however; “it should never have happened. Our hierarchy should be respected. Things that cannot happen in London or Europe should not happen here. We demand respect and good treatment for our Executive, Judiciary and Legislature.”

She noted that the Ministry was also concerned about why Ghana was made to pay as much as 1,300 pounds for its direct flights whereas neighbouring Nigeria pays only 900 pounds.

“We don’t understand why we pay more,” she said, adding that, Ghanaian passengers have also complained of Nigerian passengers getting more luggage allowances than Ghanaians.

Another concern was the relocation of Ghana flights to London from Terminal 5 to terminal 3, causing passengers to walk long distances.

She lamented the continues poor treatment of Ghanaian passengers on BA, saying the airline was pushing Ghanaians to the wall and warned that Ghana would take drastic measures if such an incident occurs again.

“We expect you to change your attitude towards us both inbound and outbound”.

British Airways Airport Manager, Ms Pat Bonsu, who attended the meeting with other officials, said the bedbugs infested flight had been changed and could support it with document.

The delegation could however not speak to the other issues, as they did not have prior notice of the presence of the media.

A written comment by BA on the bedbug issue noted that, while hotels and airlines occasionally faced bedbug issues, reports of bedbugs on British Airways was rare and the airline was vigilant and continues to monitor their aircraft.