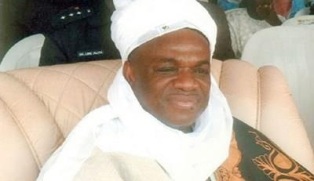 The Economic and Financial Crimes Commission (EFCC), has told a Federal High Court sitting in Lagos that its star witness in the trial of former Abia State Governor, Chief Orji Uzor Kalu, is evading appearance.

Kalu, Udeh Jones Udeogu and Slok Nigeria Limited were arraigned October 31, 2016 by the EFCC before Justice Mohammed Idris on a 34-count charge of N3.2billion fraud.

They pleaded not guilty.

At the commencement of proceedings today, EFCC counsel Mr Rotimi Jacob informed the court that the matter was due for continuation of trial, but that he could not proceed because he could not find his star witness.

Jacob told Justice Idris that the witness, Mr Mike Udoh, had repeatedly made himself unavailable whenever he was due to appear in court to give his testimony.

He accused some unknown persons of being behind Udoh’s absence and vowed that they would be prosecuted.

According to him, “Our main witness that we intended to call, we have approached him for more than six months. We have noticed that each time the matter is coming up, he will just travel to Umuahia or Calabar or Cameroun.

“He always has the dates of the matter and I was forced to apply for a subpoena. Your Lordship signed one, which we took to the Abia State Government because we found out that he was a civil servant. But he has since left the service.”

“He was supposed to come today, but switched off his phone. EFCC went to his house in Umuahia yesterday and this morning, but met his wife who said he travelled to Calabar. Despite all our efforts, we have not been able to bring him.”

He prayed for a short adjournment of about a week to enable the agency round up its case.

“We have information that some people are behind his not showing up. We are investigating and will charge the persons. As we speak, our operatives are in Abia, but they can’t pick up the wife in place of the husband,” Jacob added.

Kalu’s Counsel, Mr Awa Kalu SAN, accused the EFCC of a ploy to foist an adjournment on the court.

The former Abia State Attorney-General and Commissioner for Justice said, “The defendants have been diligent in presenting themselves for trial, but the prosecution has been engaging in push and starts. The second defendant is a retired civil servant.”

The first defendant (Kalu) is a politically exposed person. There are four senior counsel with at least one junior all at the defendants’ cost. Yet we are here only to be told of circumstances beyond the prosecution’s control? There are many witnesses listed by the prosecution. The non-appearance of one of them cannot foist an appearance on this case.”

“We abandoned everything else to come to court. My client is complaining he cannot afford my bill. The defence has never made any application for adjournment. All adjournments have been at the prosecution’s instance. They must be compelled to close their case, otherwise Your Lordship should award costs to cover our transport and hotel bills,” he said

Counsel to third defendant Slok nigeria Ltd, C.C. Nwofo lamented the economic damages the firm has suffered because of the trial and adjournments.

According to him, “The third defendant is a company which has suffered and lost contracts of about $500million from China Exim Bank for ship acquisition. About $350million has been lost from African Bank in Egypt. 3,000 workers have lost their jobs because of this case. 250 expatriate workers have lost their jobs because of this case.We have not been paid our fees in this case, but I’m doing it because I believe this case will end one day and I’ll be paid. If they are not able to proceed, I propose a cost of N10million.”

But Jacob, who urged the court to uphold his prayer, said it was not frivolous.

According to Jacob, “If I have that man (Udoh) today, I am comfortable to close my case. I am entitled to five adjournments. We want to use this week to get this witness. We now know his house. We must get him. I believe we will. No amount of shielding will protect him.”

He noted that this was the final adjournment it would allow.

Justice Idris said, “Where a witness that ought to attend court, fails to attend court and summons has been issued and served on the same witness, then the prosecution would pursue the appropriate provisions of the ACJA to compel the attendance of the witness in court…This trial will no longer be adjourned on account of unavailability of witness to attend court… It is unfortunate that a trial, which has been adjourned for hearing from day to day could not proceed due to witness unavailability,” the judge said.

The case continues on January 22 and 23.