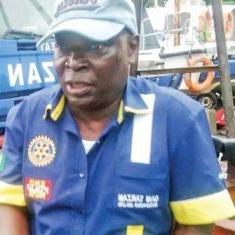 The Managing Director and Chairman of Tarzan Marine Services Limited, Ganiyu Tarzan has stated that despite the challenges it faced in 2017, it was able to sustain its operations.

This is just as he said that tourism media is the only credible group that can help Nigeria in the quest for sustainable tourism, calling on stakeholders to join hands to move the sector to the next level..

He said this during a Media Party in celebration of tourism journalists at its famous Beach House at the weekend in Lekki, Lagos.

Tarzan also disclosed that very soon the Beach House would be renovated and rebranded with a special ferry service to other beache recreation grounds within and around Lagos.

“Though 2017 was very tough for Tarzan group, we still managed to remain focused, putting in place new jetties and other operational facilities that can help both transportation and outdoor water based recreation”, he said.

The tourism media as represented by Association of Nigerian Journalists and Editors of Tourism(ANJET), he stated had contributed immensely to the growth of tourism in the country and that Tarzan group would  continue to work with association and at all times remember its invaluable support to Tarzan group without any form of pressure or expectations. The Tarzan Marine boss stated that Tourism journalists had contributed to the success of the organisation on various fronts, particularly when the organisation was faced with challenges of growth and that the media also help to explain the company’s overall intention and aspiration to government.

Speaking further, he said, “I salute your courage and tenacity in the face of avoidable challenges, particularly the seeming lack of sustainable support from the organised tourism private sector. As we are all aware, this type of gathering has always being the face and corporate feature of Tarzan Boats Limited ,not just to appreciate the tourism media but also to help encourage ANJET, as an association to remain strong as tourism advocate in Nigeria.”

The Get –Together brought together tourism journalists from the print, electronic and online, who took a boat cruise from Tarzan Beach House to different jetties such as the headquarters of the Marine Police, the site for the Headquarters of the Lagos Ferry Service and back. * The CEO of Lagos Ferry Services , Mr Kalejaiye Adeboye with journalists during the cruise

On board the safety conscious boat cruise provided by Tarzan Marine Services Limited, there was no dull moment, as journalists had a lot of fun and there was enough to eat and drink.

The event came to a climax with a dance party on board with upcoming artists, comedians, dancers and gymnast thrilling the ever ready and fun loving tourism journalists.

One of the dancers and gymnasts, who entertained guest at the occasion, was Blessing Okute, a highly talented gymnast from Delta state.

Her performance  applauded by journalists and other guest that were on board. * Blessing Okute , a gymnast and dancer performing at the event

Why some were wondering  if she has bones at all in her body,others wondered if she is from this part of the world.

Not left out was another female dancer and a fine artist, Victoria Ndubuisi.

Victoria exhibited her skills effortlessly by given the guest an amazing painting of the Abami –Eda also known as Fela Anikulapo Kuti.

What makes Victoria’s painting wonderful was that she did it upside down .

While she was painting , there was suspense among journalists as to what she was doing but when she dropped her painting tools and turned the painting upside down, the shout of Fela F-ela -Fela rented the air to the admiration of everybody present at the event.

The organiser of the cruise and some guests that attended the event, who could not hold back their joy with the skills and talents of these girls appreciated them.

Be the first to comment on "Marine Transportation: We Sustained Our Operations Despite Challenges In 2017—Tarzan"