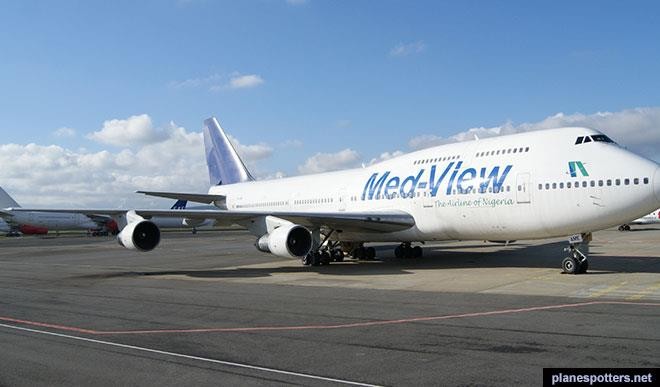 …As Carrier Appeals To Nigerian Passengers For Understanding

Angry Med-View Airline London bound passengers today disrupted the airlines operations over failure by the carrier to fly them to London as agreed.

They alleged that they have been stranded at the international wing of the Murtala Muhammed Airport (MMA, Lagos since Christmas Eve, adding that during their ordeal, the airline did not attend to their needs.

The passengers, who later protested at the Nigerian Civil Aviation Authority (NCAA) Consumer Protection Department, further alleged that they were abandoned by the airline.

One of the stranded passengers, who preferred to remain anonymous said,  “We have been here since December 24, Christmas Eve but up to this moment we have not heard from the airline. The airline just abandoned us.”

The passengers added that they neither received text messages nor were they communicated to through their emails.

They claimed that when they started agitating the staff of the airline, who were at the airline’s counters disappeared, wondering why the airline is treating its passengers like this.

Abelnewsng.com learnt that just as the stranded London bound passengers were protesting at NCAA office at the terminal designated for consumers complaints, Dubai passengers were said to have joined the protest  and that this further compounded the situation, as the two groups were no longer willing to listen to any explanation.

Recalled that the airline had in a statement attributed the inability of the airline to fly passengers to adverse weather conditions and technical issues.

However, Abelnewsng.com learnt that the London bound passengers got reprieve when an airline official appeared from nowhere with a list distributing the passengers to Kenya Airways, Ethiopian Airlines, and RwandAir.

A text sent to him on the matter was not also replied.

Reacting the airline in a statement issued by the Chief Operating Officer (COO) Michael Ajigbotosho said, “Our flight VL 2101 out of London to Lagos on Friday December, 22 which has about 300 passengers on board returned back to Gatwick after departure as a precautionary measure taken by the Pilot- in – Command (PiC) in line with Aviation Standard and Recommended Practices. This led to cancellation of the flight as the aircraft was declared AOG (Aircraft On Ground). The passengers were catered for, they were lodged in a hotel and those who decided to go back home were also taken care of. After the aircraft was declared AOG, we had to wait for a maintenance report. The aircraft had to remain on ground until a certified expert carries out the necessary checks and certify that the aircraft is airworthy. So the holiday compounded the problem.”

The statement continued, “In line with that confirmation, we decided to seek for a relief flight and tried as much as possible go get the approval from both the Civil Aviation Authority (CAA) of Nigeria and the CAA of United Kingdom in Gatwick. We attest to their full cooperation and we appreciate them. We announced to operate three flights feeling the concern of all our passengers. On Wednesday December 27, we positioned three aircraft after securing the approval of the CAA including Nigerian authority. Disappointingly, due to the unruly behaviour of some Nigerian passengers, the Border Force had to intervene to support the operations for crowd control purposes.”

“These three aeroplanes would have evacuated 700 passengers which would have normalized the situation. But the passengers neither understood nor knew the challenges ahead which resorted into having a delayed operation and crew rest and we ended up operating two flights out of three. We use this medium to appeal to our Nigerian customers. As much as we appreciate their patronage and apologize for the experience they went through this Christmas, we seek for their understanding to know that their safety comes first before any other thing.  We feel their concern and the expectations of meeting their families for the Christmas Holiday. Our normal flights resume on Friday for London, Dubai and Jeddah,” he airline assured.