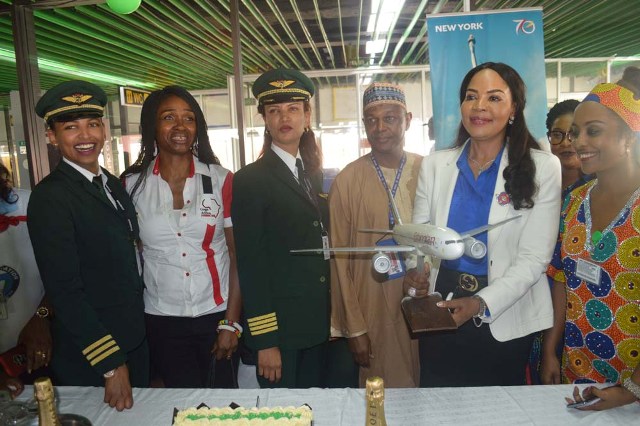 The Chairman of House Committee on Aviation,Hon. Nkeiruka Hon. Onyejeocha, the Managing Director of the Nigerian Aviation Handling Company(NAHCo), Mr  Idris Yakubu and the Acting Managing Director of the Nigerian Airspace Management Agency(NAMA), Mr Gabriel Akpen today  welcomed the First All Female Flight by Ethiopian Airlines at the international wing of the Murtala Muhammed Airport(MMA),Lagos.

The Captain of the All Female Flight, Endeganew Amsale Gualu landed the Boeing 777-300 ER ,flight ET901 at about 1.15 pm Nigerian time amidst cheers by both passengers on board and those waiting to welcome them  at the airport.

With this flight, Ethiopian Airlines becomes the first international airlines to operate All Female Flights into Nigeria from Addis Ababa, the Ethiopian capital.

On landing at the Lagos Airport, the Boeing 777-300 ER was ushered into the country with  showers from the Federal Airports Authority of Nigeria (FAAN) fire department’s water canon . Speaking with journalists shortly after welcoming the crew, the Chairman House Committee on Aviation, Hon Nkiruka Onyejeocha commended the crew of the flight  for the feat , adding that they have created a new record and that they have also opened a new vista in the aviation history.

The lawmaker opined that the feat made by the team has challenged the dominance of men , calling on women to keep on encouraging their  daughters to take courses in aviation industry  to become pilot, Air Traffic Controllers(ATC),Aircraft Engineers, cabin crew, dispatchers among others. According to her, “We are moving forward, we are breaking grounds . We are not bank benchers , today we have pilots, cabin crew, engineers all female. It is an experience and it’s a great thing happening.”

She stated  that Ethiopian Airlines  had always be on Nigeria;s side , as it was the only international carrier that flew to Kaduna Airport when the only runway at the Nnamdi Azikiwe was under repair , adding that the Federal Government will also stand by the airline.

Also speaking, the Managing Director of NAHCo PLC, Mr Idris Yakubu who commended NAHCo for the feat , adding that NAHCo is very happy to be part of this history making event  by being the ground handling company that handled the First All Female Flight by an international airline; Ethiopian Airlines.

He started that NAHCo provided excellent ground handling service to the flight on landing at the international wing of the airport.

The NACHo boss assured that NAHCo would continue to provide quality ground handling services to Ethiopian Airlines and other airlines it handles.

Speaking further, Yakubu stated that the First  All Female Flight  was a great feat by Ethiopian Airlines’ female pilots and that it was also  a good one for NAHCo for being the ground handler that handled the flight.

Speaking to journalists after she led an All Female Flight to land the aircraft,Capt. Amsale Gualu said, “My first African flight was historic and it was good. This is not my first international flight but it is my First All Female Flight. I am privileged to be part of this flight.”

On how she feels being the leader of the team to operate the flight, she said,”I did not feel uncomfortable, not at all, that was a day to day experience.” Speaking further, Amsale Gualu, said, “It is my childhood dream, I have always wanted to be a pilot since I was a child when my father took me to the airport then when I was in high school I used to be impressed by the uniform and after graduating Addis Ababa university I joined Ethiopia Airlines as a first officer and flew Folker 50 and Boeing 767 and in 2010 I became a captain on Dash Q400 and from there a captain on 767 now I also fly 777 and 787.”

Also present at the welcome event are  the Director Consumer Protection, Nigerian Civil Aviation Authority(NCAA) Alhaji Adamu Abdullahi, the two factions of Women in Aviation;led by Rejoice Ndudinachi and the that led by Ify Megwa, officials of the Nigerian Immigration Service(NIS),NAMA General Manger Public Affairs, Mr. Khalid Udoh Emele and his team, officials of FAAN, Aviation Security(AVSEC),staff of Ethiopian Airlines, Goge Africa team among others.

Be the first to comment on "Hon.Onyejeocha, NAHCo MD, Acting NAMA Boss, Others Welcome All Women Flight At Lagos Airport"