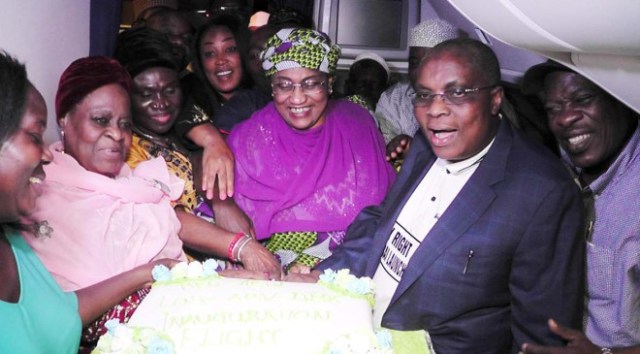 A new innovation was introduced into in-flight service on December 7,2017 when one of the leading airlines Med-View Airline  not only commenced operations to Dubai but also  served egusi and semovita and jollof rice, fried plantain and chicken  to its passengers.

The flight to Dubai, which has been in the news some weeks before the operation finally commenced on December 7,was greeted and received by passengers as one of the best thing to happen in the Nigerian aviation industry barely 24 to the end of the year.

At the international wing of the Murtala Muhammed Airport(MMA)Lagos,where the flight originated from, it was an ambience of joy and happiness from passengers, who were happy flying their own airline to Dubai.

The happiness written over the faces of the Dubai bound passengers was further complemented by the pump and pageantry that accompanied the departure of the B767 aircraft,which took off from Lagos airport at about 3 pm.

On landing at the international wing of the Nnamdi Azikiwe Airport(NAI), Abuja,it was welcomed by men from the Federal Airports Authority of Nigeria (FAAN) Fire service in two fire tenders and there after  released  cannons of water from both left side of the aircraft.

This was done to the admiration of the passengers,airports workers and aviation journalists. * Managing Director of Med-View Airline Alhaji Muneer Bankole (middle) with other members of staff of the airline with a cake to celebrate the Lagos-Abuja-Dubai inaugural flight of the airline at Murtala Muhammed International Aiport, Lagos on Thursday.

On completing that ceremony, the airline went ahead to board Abuja passengers ,who are going to Dubai at about 6.10pm and arrived Dubai at about 12:20am Nigerian time.

Some of the dignitaries that flew on board the inaugural flight were the Minister of Women Affairs, Hajia Aisha Jumai Al Hassan, the Managing Director of Med-View Airline, Alhaji Muneer Bankole and his wife, representatives of the Oba of Lagos Super Eagles striker, Odion Igharo,aviation journalists,  among others.

One of the very important and unique features on board the inaugural flight to Dubai was  that passengers were served Nigerian meals which includes: jollof rice, plantain and chicken, pounded yam, semovita and egusi soup, pastas among other foods on board.

Speaking on the maiden flight to Dubai, the Managing Director of Med-View Airline, Alhaji Bankole, who was also on board hailed the passengers for patronising   their own Nigerian airline,assuring them  that Med-View  will not disappoint  the passengers for making it their preferred airline on the Lagos-Abuja-Dubai route.

To further encourage Nigerians to fly the airline, Bankole stated that any passenger that flies with Med-View on the Dubai route five times is bound to get one free, adding that the airline will be flying to Dubai, three times in a week.

The Med-View boss disclosed that the  airline will soon commence flight operations into the Jeddah in Saudi Arabia on December 24 and Houston in 2018.

The high point of the flight was the cutting of the inaugural flight cake on-board by the Managing Director Med-View boss,Alhaji Muneer Bankole in the presence of the  Minister of Women Affairs and some passengers to celebrate the event.

Also worthy of mentioning is that Mr Tayo Adesokan, a male passenger used the occasion to surprise his girlfriend of many years, Tolulope Sanya by proposing to her to marry him on board the aircraft.

While on board passengers celebrated with  the couple

Be the first to comment on "Med-View Airline Hails Dubai Passengers,Serves Local Meals On Board"