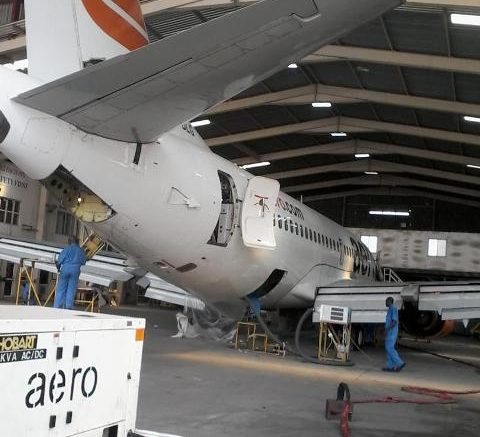 …Pays N300M Of The N2.2 billion Meant For Redundancy Package

As part of efforts to make Aero Maintenance Unit the leading Maintenance, Repair and Overhaul (MRO)in West and Central Africa regions, the carrier has partnered with South African Technik, A.J Walters of the United Kingdom and Ethiopian Technik  to assist in developing the entity’s MRO facility.

This is just as he disclosed that the company would very soon secure a core investor, who according to him is likely to take more shares in Aero.

The Managing Director of Aero, Capt. Ado Sanusi, disclosed this while speaking to aviation journalists at the airline’s headquarters at the Murtala Muhammed Airport (MMA), Lagos, yesterday.

Sanusi explained that the essence of the partnership is to develop its MRO to a level that it would be able to carry out line maintenance for airlines operating in Nigeria.

He further explained that the maintenance unit  has been separated from the airline the moment the Nigerian Civil Aviation Authority (NCAA), approved C-Checks on B737 classics, adding that the MRO is now generating revenue for the organisation.

According to Sanusi, “We have a wide range of partners, we have partnered South African Technik on quality inspection and specialized manpower, they supervise our C-Checks, we have A.J Walters of UK, they have their office here in Aero, they will be supplying spares , we have also entered into a broader  agreement with Ethiopian Technik, they are very good, they will support the C-Checks, we are also in talks with others because we discovered that there is no formidable MRO in West and Central Africa so we intend to develop the MRO to a level that will be able to provide line maintenance for airlines operating in Nigeria, that is why we have separated the airline from MRO.” Many airlines the Aero boss stated had  indicated interests to bring their aircraft for maintenance since the airline secured the approval, adding that from all indications, ‘the MRO base would be fully occupied for the entire next year’.

Speaking further Sanusi said, “As soon as we secure the approval, three companies came for maintenance and as we speak, we are in the process of getting approval from Ghana Civil Aviation Authority to start carrying out maintenance on aircraft from Ghana, we are also getting responses from other international organisations, I just received a mail from another company indicating intention to do business with us so the C-Checks is where the airline makes money now, we carry out maintenance on wheel and brake for majority of the airlines in Nigeria, since there is no formidable MRO in this part of Africa, we feel that if we develop this very well, it will be of great benefit to the whole country. We want to develop it to the extent that we will be selling spares to companies.”

On stabilising Aero, Sanusi stated that the  current management had managed to stabilise the company, adding that out of the N2.2 billion meant for redundancy package, the company has paid N300 million and reduced the seven months debt to four months.

The balance of N1.9 billion, the Aero MD said would soon be paid as soon as more aircraft are back in operations. “We have the MRO now as a successful business and we have called back 120 workers from the 60 per cent of the workforce on redundancy, we have put them on contract but as the demand for aircraft maintenance increases, they will become permanent staff and we are likely to call more or everybody back depending on the fleet size, we have managed to stabilise the company for the past 8 months and we are still trying to do so.”

Speaking further Sanusi said, “By the end of next month, we will have the aircraft on C-check back in the country and we will start paying the money until we liquidate the debt, we are not irresponsible to discharging our duties and by the middle of next year or so, we will have four Boeing aircraft and  two Dash-8 flying”.

On the core investor, he said that very soon Aero would have a core investor who is likely to take more shares in Aero and that 19 companies bided for but that it was later reduced to six, which according to him would be further pruned down to three; the preferred bidder, the legacy owner and Asset Management Corporation of Nigeria (AMCON).

In his words, “Let me correct the impression that AMCON is not ready to turn things around, AMCON is very committed to making sure that the company does not go into extinction, they are spearheading the restructuring and bringing core investor, and the investor will rejuvenate the company.”

He continued, “We have looked at a long term plan for Aero, say between 5-25 years, the core investor has been informed that there is need for fleet renewal, everything is on the table for the core investor.”

Be the first to comment on "Aero Partners SA Technik, A.J Walters, Ethiopian Technik On MRO"