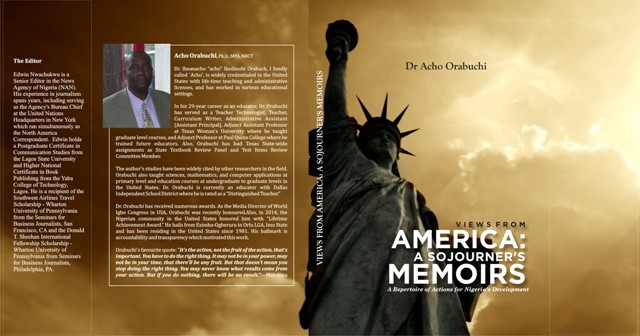 The much-awaited book, “Views from America: A Sojourner’s Memoirs- A Repertoire of Action for Nigeria’s Development”, authored by Dr Acho Orabuchi, a Nigerian in the Diaspora, will be officially unveiled on Dec. 28, 2017 at Rockview Conference and Seminar hall, Government Layout, Owerri,  Imo State by 11am.

The forewords to the book were written by Sen. Ike Ekweremadu, Deputy Senate President and Mr Femi Adesina, Special Adviser to President Muhammadu Buhari on Media and Publicity.

Similarly, its preface was penned by no other personality than a former Governor of Imo State, Dr Ikedi Ohakim.

The 253- page book, which consists of eleven chapters, expressed the dire need to create employment for young people

In the book, Dr Orabuchi said, “We cannot resign ourselves to losing a generation of young people who do not have the dignity of work’’.

The author also expressed the hope that President Muhammadu Buhari would be stronger to curb corruption and vestiges in government.

He bares his mind on the daunting issues and challenges of nation building and aims to sensitise Nigerians on their roles and responsibilities in bringing about the Nigeria of our dreams.

This compilation of articles written by Dr Orabuchi, provides, almost in accurate terms, the perception of Nigerians in the Diaspora.

It is a window to an unbiased rating of government’s performance and a leeway to Nigeria’s socio-political and economic recovery.

The author’s love and passion for his mother land, propels him to comment on the socio-political challenges needed in bringing about a new Nigeria.

The scholar believes in the potential of every Nigerian to join forces with the government of the day in turning in a more secured country with a robust economy.

This erudite scholar explains through numerous articles, the roles of dedication and service as key ingredients that every citizen of Nigeria should have to bringing about a more transparent and healthy economy.

His postulations are geared towards investor-friendly policies that would galvanise local and international investors to revamp the economy.

Dr Orabuchi is an avid believer in Nigeria making a paradigm shift from a mono-economy to a diversified economy where industrial growth and expansion would shore up the revenue base of the nation.

And also, delving into the political arena in the face of the lingering, seemingly “gloomy economy,” the don believes in a total overhaul of the current local government system in Nigeria.

He also believes that a lot depends on state governors, to bolster the revenue base of their states.

The book is edited by Edwin Nwachukwu, a Senior Editor in the News Agency of Nigeria (NAN). His experience in journalism spans years, including serving as the Agency’s Bureau Chief at the United Nations Headquarters in New York.

Be the first to comment on "(Book Presentation)Views From America: A Sojourner’s Memoirs For Launch On Dec. 28"