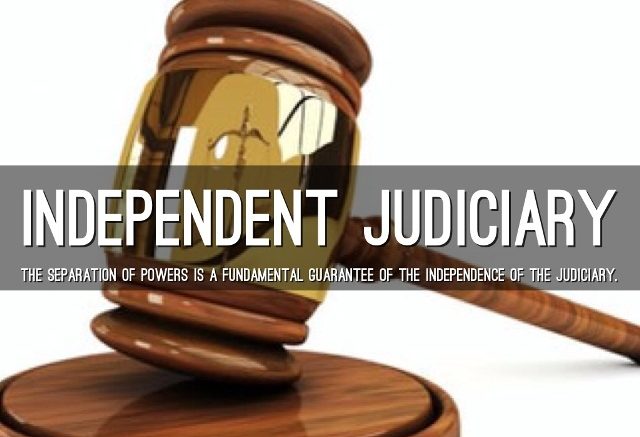 Justice Adedayo Akintoye of the Lagos State High Court, Igbosere today withdrew herself from the case of a fellow judge, Justice Hyeladzira Nganjiwa, who was charged with unlawful enrichment to the tune of $260,000 and N8,650,000.

Justice Akintoye said her decision to withdraw from the case was based on a petition written by the embattled Justice Nganjiwa, asking that his case be transferred to another judge, for fear of bias.

“In view of the letter written by the defendant to the administrative judge, the file of this case is no longer with me; this case has been transferred to another court,” Justice Akintoye informed the prosecuting counsel, Mr. Wahab Shittu, today.

Clarke had, at the last adjourned date, told Justice Akintoye that his client was afraid that he would not get justice should his trial continue before Justice Akintoye.

The reason, he said, was because Justice Akintoye was already hearing the case of Mr. Rickey Tarfa (SAN), who was accused of bribing two judges, one of which is Justice Nganjiwa.

“The charge, as filed, constitutes double jeopardy against the defendant.There is a sister case before this court containing virtually all the allegations and particulars in this new case.You cannot make up your mind in one particular case and change it in another case. We are not afraid that justice will be done, but justice must be seen to have been done,” Clarke had said.

The SAN told Justice Akintoye that he had already written a letter on behalf of his client to the administrative head of the Lagos State High Court in Igbosere, seeking the transfer of the case.

“In essence, My Lord, I am of the view that opinion formed by the learned trial judge as regards charge LD/2544/16 will invariably lead to same opinion in the information against my client.My Lord, as it stands, fair trial in the eye of a reasonable man is likely to be tainted as there is likely of bias.”

But the Prosecuting Counsel for the Economic and Financial Crimes Commission, Shittu, described Clarke’s application as a ploy to frustrate the trial and urged Justice Akintoye to reject it.

Shittu maintained that Tarfa’s case would have no bearing on Nganjiwa’s case because they were not being jointly tried.

He said Clarke’s application was tantamount to asking for a stay of proceedings, which he said the court had been enjoined not to grant in a criminal case.

Justice Akintoye had adjourned till Wednesday for ruling.

However, rather than deliver a ruling, the judge simply said she had withdrawn herself from the case.

Be the first to comment on "Alleged Bias : Judge Withdraws From Justice Nganjiwa’s Trial"