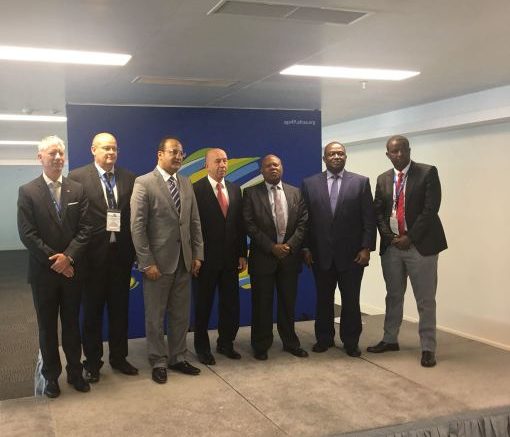 The African Airlines Association  (AFRAA) and the International  Air  Cargo  Association  (TIACA)  have signed  a  Memorandum  of  Understanding (MoU) to work closely on development of air cargo for the benefit of their mutual members and the industry at large.

The MoU was signed by TIACA Secretary General, Mr.  Vladimir  Zubkov and  AFRAA  Secretary  General, Dr Elijah  Chingosho at the sidelines of the just-concluded  AFRAA  49th  Annual  General  Assembly  &  Summit  that  took  place  at  the Kigali Convention Centre in Rwanda.

Speaking on the MoU, AFRAA Secretary General, Dr.  Elijah Chingosho, said,  “AFRAA  is  constantly  seeking  ways  to  create  more value  to  its  members,  and  in  doing  so  we  are  very  excited  to  deepen  the  cooperation  with TIACA,  to  tap  into  their  expertise  and  knowhow  on  air  cargo.  With  the  financial  and economic performance of  African airlines  being  currently below  global standards,  AFRAA believes  it  can  build  on  our  mutual  experience  and  expertise  with  TIACA  to  benefit  both organisations  and  help  change  the  fortunes  of  African  carriers.  We expect synergies to emerge among our organisations.”

Chingosho, who hailed the MoU said, “It  is  indeed important  that  the  oft-neglected  cargo  sector  receives  the  attention  it  deserves  at  AFRAA forums and conferences.”

Under the MoU, the two associations will work to improve air cargo safety and security, as well as champion industry’s adoption of digitisation and offer new training initiatives with the  aim  to  support  the  rapidly  developing  air  cargo  sector  in  Africa.

On his part,  the Secretary  General,  TIACA, Vladimir  Zubkov, said, “ “This  is  a  landmark agreement that  allows  TIACA  to  offer  its  expertise  to  the  much  larger  group  of  airlines  in Africa.” “TIACA stands to benefit from better connection with the continent, which is the fastest developing in air cargo movement. We are happy to offer assistance from TIACA in structuring the air cargo part of the future AFRAA agenda,” added.

Other  areas  of  cooperation includes: advocating for improved market access across the continent, the modernisation of air cargo facilities and services and promoting environmental best practice, as well as working together on future events.

AFRAA is a trade association of airlines from the member states of the African Union (AU).  Founded in Accra, Ghana, in April,  1968,  and  headquartered  in  Nairobi,  Kenya,  the  primary purposes  of  AFRAA are to foster commercial and technical  co-operation  among  African  airlines  and  to  represent their common interests.  AFRAA membership of 40 airlines cuts across the entire continent and includes all the major inter-continental African operators.

The association members represent over 85 per cent of total international traffic carried by African airlines.