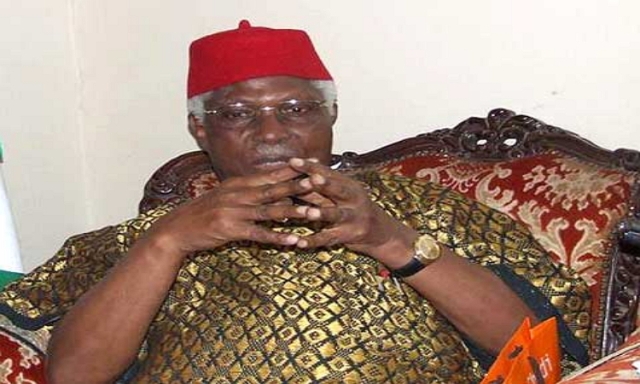 The former Vice President in the 2nd Republic, Dr. Alex Ekwueme, is dead.

His death was disclosed in a statement issued by the Ekwueme family of Oko, in Anambra State released in the early hours of Monday.

The statement which was  signed by the former vice president’s brother and the traditional ruler of Oko in Anambra State, Igwe Laz Ekwueme, explained that he passed on at about 10:00 pm on Sunday, in a London hospital.

“Ekwueme family regrets to announce the peaceful passing away of their patriarch, the former Vice-President of the Federal Republic of Nigeria, Dr. Alex Ifeanyichukwu Ekwueme, GCON. The sad event occurred at the London Clinic at 10:00 pm on Sunday, 19th November, 2017,” the statement reads.

Recalled that Ekwueme was hospitalised in Memfys Neurosurgery Hospital, Enugu, for about two weeks before he was flown abroad for further  medical treatment on November 12,2017.

The elder statesman was rushed to the hospital after he collapsed at his residence in the Independence Layout Area of Enugu on October 28,2017.

His death is coming barely a month and 10 days after he celebrated his 85th birthday.

Recalled that Ekwueme celebrated his 85 birthday  on October 10, 2017.

Be the first to comment on "Fmr. Vice President, Alex Ekwueme Dies In London Hospital"