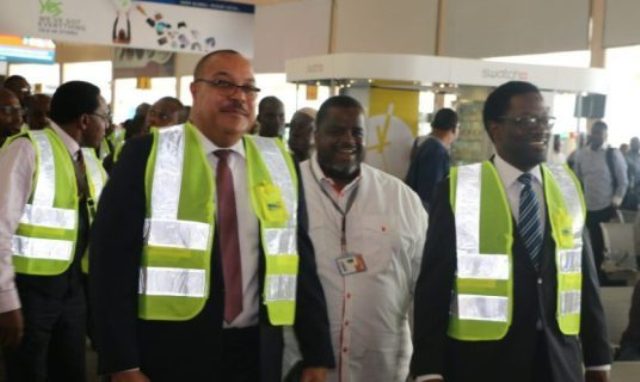 …Says It Is Ready To Commence Operations

Bi- Courtney Aviation Services Limited(BASL) operator of the Murtala Muhammed Airport Terminal Two(MMA2,the only terminal managed by private entity in the country has appealed to the Nigerian Civil Aviation Authority(NCAA) to restore the approval earlier given to it commence regional flights from the terminal.

This is just as BASL argued that both domestic and regional flights can originate from the same terminal but must be physically seperated to prevent passengers from coming in contact with each other and for security reason.

The Managing Director of the terminal, Capt. Jari Williams made the appeal while speaking to journalists shortly after a facility tour of the Buld Operate and Transfer(BOT) termnal commisioned in April 2017.

He contended that in Ghana, both domestic and international flights take off at the same terminal, adding that those arguing that both domestic and regional cannot take place in MMA2 are probably operating 1950 aviation .

To butress his point, Williams also cited the case of Heathrow Terminals,which according to him operates both domestic and international flights.

Other terminals in the country that operate both local and international flight are Abuja and Port Harcourt Airports.

The Managing Director added that BASL has the capacity and capability to operate both donestic and regional flights from the terminal, as it has invested heavily on equipment that will make passenger facillitation smoother.

The terminal , he stated had already provided the facilities for the regional operation and that it had also physically seperated the areas for regional flight from domestic  flight in line with the International Civil Aviatio Organisation(ICAO) regulations.

To further show the terminal’s preparedness to commence regional flights, the MMA2 boss stated that MMA2 had installed a machine that can read only regional tickets, adding that with all the passengers facilitation facilities put in place at the terminal, it would take not less than 3 minutes to facilitate a passenger.

He also hinted that the terminal’s boarding gates have been integrated with the check in system, adding that the essence is to give passengers quality service.

Facilitation, he said is not possible without the cooperation of the ground handlers, adding that terminal operator must work with ground handlers to achieve very positive results.

Other equipment which the terminal has provided to show its state of readiness includes: equipment for partially mobile passengers, Immigration counters and boarding gates.

The terminal has also made available offices for the Nigerian Immigration Sewrvice(NIS), National Drug Law Enforcment Agency(NDLEA)Quarantine and Customs and the Directorate of State Security Services(DSS).

On the major challenge facing the terminal, the managing director stated that the main problem is the refusal by the Federal Airports Authority of Nigeria(FAAN)to give Bi- Courtney the exclusivity to allow all domestic flights to originate from MMA2 as contained in the concession agreement.

Williams argued that given exclusivity to BASL  is the stanadard practice, adding that MMA2 should enjoy it because it pioneered the building and operation of the first private terminal in the country by investing millions of naira in the project.

According to hi, “today government has taken 50 per cent of our revenue for not allowing exclusive right for all domestic flights in Lagos to originate from MMA2.”