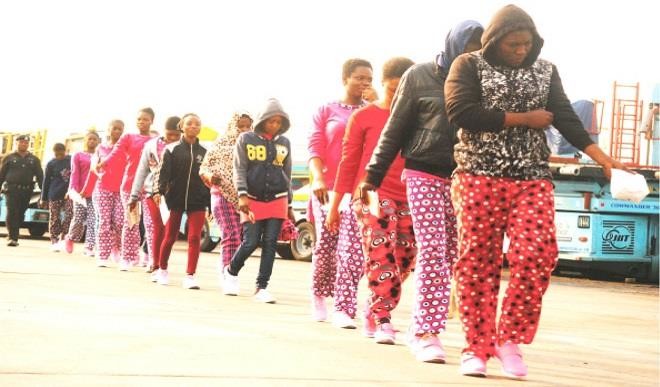 The National Emergency Management Agency(NEMA) yesterday  received a batch of 257 Nigerian Voluntary Returnees from Libya, who were stranded in the course of their failed attempt to cross over to Europe through Libya.

The were brought back to Nigeria  in an Airbus A330-200 series  flight with registration number 5A- LAT and landed at the international wing of the Murtala Muhammed Airport(MMA),Lagos at 9:15 p.m

On landing at Lagos Airport, the International Organisation for Migration( IOM) handed over to the Zonal Coordinator of NEMA Southwest, Alhaji Suleiman Yakubu on behalf of Federal Government.

According to NEMA ,the breakdown of the returnees includes  241 adult female, 2 adult children and 5 infants female making 248 females while only 4 male adults, 4 male children and 1only male infant completed the total figure of 257 returnees.

Speaking shortly after receiving the returnees, the Director General of NEMA, Engr. Mustapha Maihajja represented by the zonal coordinator enjoined the returnees to embrace the Change mantras of the Federal Government to be positive in making the nation back on track by making their quotas in the development and redefining the new Nigeria all crave for instead of seeking greener pastures where it doesn’t exist.

He told the returnees that no one would be treated as second citizen because they are to enjoy their full rights unlike foreign countries where they would be regarded as second citizens without certain benefits especially those that are illegal migrants.

Present at the handing over of the returnees were officials of  NEMA , National Agency for Prohibition of Trafficking in Persons (NAPTIP) , Police, Immigration services and official of the Federal Airports Authority of Nigeria(FAAN).

The returnees were later  given food  and tokens  after profiling for their transportation to their respective destinations.